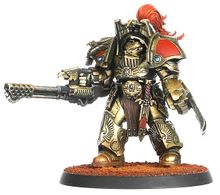 Solerite Power Gauntlets and Power Talons are potent power weapons, that were created for the Thunder Warriors' elite forces during the Unification Wars and were patterned after ancient Terran weapons. However, after the Emperor ordered the Thunder Warriors to be destroyed, the Solerite power weapons became part of the Adeptus Custodes' arsenal. They differ from the standard power fists and claws utilised by the Legiones Astartes, as they are nigh-indestructible; as a result of being forged in furnaces recovered from the ancient Tempest galleries near Terra's molten core. One draw back of the Solerite's design though, is that they are equipped with artefact power coils, that are now near-irreplaceable.[1]