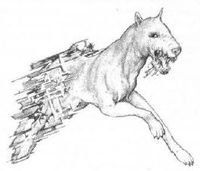 These entities are noted for being extremely predatory and carnivorous beings, though they are ultimately not intelligent. Instead, brute instinct guides them to track the psychic aura of their prey across Warp Space. While capable of tracking any psychic being, these Hounds find the minds of unprotected Human Psykers to be the strongest and most attractive prey. The scent from such targets is so strong that it creates a compulsion for the Astral Hound and makes them the most dangerous threat to an emergent Psyker. They are equally ferocious combatants to face for those that encounter such creatures. During their hunts for prey, Astral Hounds can either hunt alone or be in packs of as many as six such creatures.[1]

Once its tracks its prey down, a Hound uses the powers of its psychic prey to manifest into the material universe. These warp entities attack with a numbing bite that is capable of paralysing their victims. Such unfortunate and helpeless victims are then dragged into Warp Space, where the Hounds begin to feed on their psychic energies. Within the material universe, those Psykers that become prey to an Astral Hound simply disappear and their absence confounds their friends as well as neighbours who have no idea that the person has been taken into the Warp. Another noted trait of such Hounds is their capacity to make short jumps through the warp, allowing them to suddenly appear several meters beside or behind their enemies.[1]