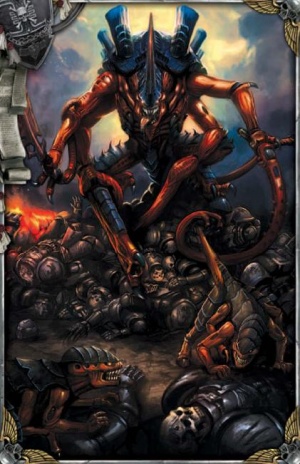 The Dagon Overlord, or known more simply as the Overlord, is a unique tyranid bio-construct to the Hive Fleet Dagon, a tool of the hive mind evolved to eradicate it]s foes on the Jericho Reach, the Overlord first appeared during the opening days of the battle for Castobel, leading a mighty swarm against Trimalov Hive and dispatching its defenders in a month-long war.[1]

In appearance he is similar to a Hive Tyrant, but different enough to stand apart from its lesser brethren.[1]

Covered in slimy plates of chitin which constantly drip and leak fluid, the Overlord projects an aura of horror and menace. Its importance and power are also readily apparent when it strides alongside other Tyranid creatures, its powerful presence emboldening and maddening the lesser creatures more so than would be expected by any link to the Hive Mind, almost as if the Overlord is the embodiment of Hive Fleet Dagon’s ire toward the Jericho Reach and its alien hatred infects creatures with a personal desire to murder, maim, and kill all those in their path. It has been suggested that this notion of the beast’s personal vendetta is just the fanciful imagining of terrified Imperial Guardsmen, though only by those who have not seen the Overlord.[1]

Since its first appearance, the Dagon Overlord has been sighted in almost all of the major combat zones of the Orpheus Salient, leading swarm after swarm into the ranks of Imperial defenders. This has led many to believe that the Overlord is just one of many, and not a unique creature at all. However such notions of individuality are hard to determine when dealing with the Hive Mind, as it is constantly recycling its troops and adding to them by consuming worlds. This means the Overlord may well be a veteran of many wars, and may have even fallen countless times to the foe, only to be re-spawned by the Hive Mind with a fresh body and a will for vengeance.[1]

Both the Ordo Xenos and the Deathwatch have made attempts to find the truth behind the Overlord, if for no other reason than to catalogue a new and deadly variation of the Tyranid race. Neither has met with much success and even when the Dagon Overlord seems defeated, it invariably rises again in another place or another time.[1]

The Overlord is an ancient Hive Tyrant and a veteran of countless battles within the Jericho Reach, as such he has gained a special hatred for the Deathwatch and seems to be actively hunting for Deathwatch Kill-Teams.[1]

The Overlord is selective about those it chooses to devour, and picks only the strongest and most powerful of its adversaries to consume. Often it will task lesser Tyranid creatures with gathering together these bodies after, or even during a battle, and piling them at its feet so it may feast on them and grow stronger. A Dagon Overlord which devours the body of a creature heals damage and may also, over time, take on traits of those it devours as it assimilates their flesh.[1]

When the Dagon Overlord is slain, its death sends a shockwave through the Hive Mind. All Tyranid creatures that aren't a Synapse creature will automatically break and flee as quickly as they can, which also overrides instinctive behaviour of tyranids. He can spur a swarm of Tyranid creatures on to greater acts of fury and force them to fight on, even when grievously wounded. The Overlord has a cloud of toxins constantly oozing from its joints and creates a virulent haze of haemotoxins, neurotoxins, and deadly phage organisms all around it much in the same way as a Venomthrope, called the Miasma of the Depths.[1]

The Dagon Overlord may have the following biomorphs: Acid Blood, Adrenal Glands, Toxin Sacs and Regeneration.[1]

It was first encountered on Castobel. It's known for its malicious streak and ability to drive lesser Tyranids into a stronger fervour. Like most Tyranids of Dagon, the Dagon Overlord is extremily toxic and constantly dripping with venom.[2]