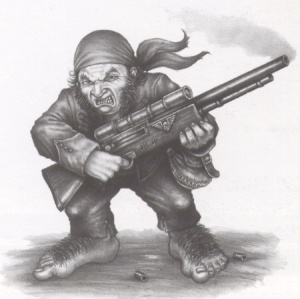 Stumper Muckstart was a Ratling sharpshooter.[1]

Stumper Muckstart showed remarkable abilities from the moment he was recruited from his home planet of Ornsworld. He quickly established himself as the best shot in the regiment, earning considerable amounts by challenging rivals to outshoot him. Soon he had a racket going, and became rich overnight as a result of the gambling associated with his trick shooting displays. After a particularly impressive night, when he shot three spinning 5 credit pieces out of the air with three shots while blindfolded, his activities came to the attentions of the regiment's Commissar. Stumper was recruited into a special sniper unit on the spot. His past misdeeds were forgiven once he had volunteered to donate all his ill-gotten gains to charitable concerns, a gesture which still leaves painful memories. Mention of this is the only thing known to spoil his aim.[1]