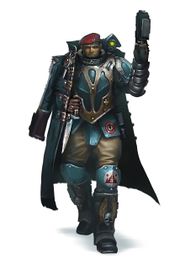 Uther Abraxes is the Tempestor Prime of the 11th Kappic Eagles.

Uther Abraxes is everything that a Tempestor Prime is meant to be. He is as cold and uncompromising, as hard as adamantium, and as merciless as a Commissar. His skills in personal combat are renowned and he has has faced down xenos warlords and heretics without flinching. He has many scars to show for these close encounters, of course, but in return he has left foes uncounted slain in his wake.[1]

However, it is not his martial prowess has earned Abraxes his rank. Rather, the Tempestor Prime is a determined and decisive commander of men. Abraxes is known for not just defeating his foes but brutalizing them with relish. Whether or not this is due to some ghost of an emotional response is irrelevant; Uther Abraxes is one of the Kappic Eagles most successful leaders, a merciless officer who gets the job done every time.[1]