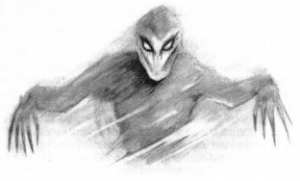 Astral Spectres are warp creatures formed from psychic energy and the fabric of the Empyrean,[1] that are created when two types of energy combine with each other. The first is living energy created when Human Psykers, who are weak in will or faith use their abilities in Real Space. The energy created by the Psykers, then congeals with the very fabric of the Warp itself to form the Astral Spectres. Although the Spectres vary greatly in appearance, they are all vile and horrifying humanoid creatures, composed of patches of semi–translucent shadow and their presence is known to unnerve all sentient creatures in their vicinity; often causing said creatures to experience psychic phenomena. Though the Spectres possess no solid physical form, they are able to wield a variety of psychic powers which allow them to interact with material beings. These abilities are used to great effect, when the Spectres emerge in Real Space to feast on the soul-essence of Humans, in order to replenish the psychic energy from which they were born from. Although Astral Spectres are sustained by a combination of life energy and the Warp, they seem to relish causing terror; as they are drawn to fear and will expend great effort to cause it. Often, they will even place themselves at risk in order to terrify a victim by appearing before him in their true nightmarish form. What benefit, if any, they derive from this fear is unknown.[2]

When the Spectres encounter prey that fights back, they almost always target Psykers first, as they are far and away the greatest threat to a being of the Warp. They also attempt to manipulate the minds of weaker opponents, causing them to interfere with or even attack their allies. If the battle should truly turn against them, the Spectres will either unleash their psychic powers in an all out attack or attempt to possess one of their antagonists. They are cunning and intelligent creatures and will always seek to take a host who is either capable of fighting his way out of the situation or one whose allies will be unwilling to attack him.[2]

While the natural form of a Spectre is incorporeal, they are able to possess the bodies of intelligent beings. They feed off the soul of their host, leaving them as a mindless husk, and absorb some of their host's memories, which the Spectre uses to maintain a façade of normality.[1]