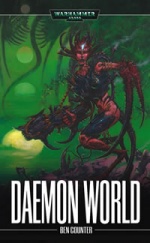 She was merciless and nothing could ever frighten her. She was the only person in Lady Charybdia's kingdom who Lady Charybdia had anything close to respect for.[1b]

As a human she had been a sacrificial victim when Lady Charybdia ordered a great summoning of daemons. But she had refused to let the daemon possess her, and eventually the mortal and the daemon came to a truce to inhabit the same body. Albeit some say the daemon was the better half, as her human half was purely malicious. She appeared malformed and lithe with pale, patterned skin. She had a tentacled head with gills running down her neck and a wide-eyed, sharp-toothed face with a snake tongue. Both her arms had mutated into weapons - one into a plasma gun and the other into a vicious claw. She wore little armour because her body warped to refuse any armour made to fit her. She also had strangely-jointed legs that carried her faster than should be mortally possible.[1a][1b][1c]