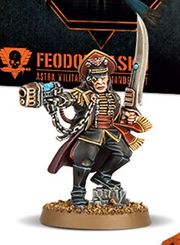 Feodor Lasko is a Lord Commissar who is despised by thousands of the Astra Militarum in the beleaguered Vigilus System, as he has a reputation for making callous, spur-of-the-moment executions. Lasko is as much a warrior as he is a disciplinarian, though, and he took command of the Drop Force Imperator of the 46th Zetetic Tygers after learning they had been engaged in a running battle against a monstrous predator on Vigilus. The same kind of predator claimed Lasko’s eye and right arm on the nearby world of Densa Grande, before he torched the beast with his plasma pistol — a feat he hopes to achieve again soon.[1]