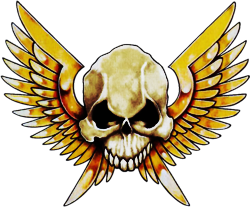 Symbol of the Astra Militarum[12a] 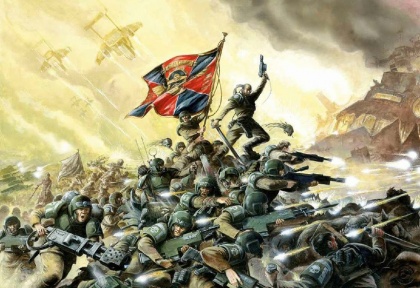 The Astra Militarum, commonly known as Imperial Guard, is the primary fighting force of the Imperium, so numerous in size that even the Departmento Munitorum cannot place a figure on the number of Guardsmen under arms at any one time; the lists of new recruits and toll of casualties can run into the millions in a single day. It would be unfeasible trying to put any exact number on the strength of the Guard; however, it is believed that there must be many billions of Guardsmen, divided into millions of regiments. This absolute numeracy provides the Guard with its main power; their ability to deploy in numbers that, eventually, result in victory. Attacking in seemingly endless influxes across battle-zones, charging forth under the cover of massive barrages and delivering massed lasgun volleys, in the Guard the individual Human soldier may appear a lost thing, almost forgotten. Yet the actions of these anonymous soldiers daily decide the fate of worlds. In times of crisis the Imperial Guard will call upon their deadliest of soldiers, whether they are the Imperium's famed Storm Troopers or the regimental elite Kasrkin and Grenadiers.[1]

The Guard forms the very backbone of the Imperium; without it, Mankind would surely perish. Whilst regular Guardsmen are hardly the equals of Space Marines, fighting neither with the advantages of genetic enhancement or the most powerful personal weaponry, the Guard possesses the courage and the manpower to face and annihilate the enemies of the Emperor across the galaxy.[2a]

Origins of the Astra Militarum

The Astra Militarum, as the standing Human armed force of the Imperium, can trace its origin back to the days of the Great Crusade, several millennia ago, when it was a somewhat different organisation known as the Imperial Army. Following the events of the Horus Heresy, however, the Imperial Army was split into two organisations; the Astra Militarum, and the Imperial Navy. This was done to prevent the possibility of large-scale rebellions occurring again, as the new regulations ensured that the link between fleet and army was severed.[1a][2b]

Since then, the Imperial Guard has endured the vast majority of the fighting in the Imperium's wars. Defending all fronts simultaneously, the Astra Militarum has crushed rebellions and alien empires alike.[1b]

The Astra Militarum's fighting forces are organised into largely autonomous regiments. These regiments are raised by the worlds of the Imperium that have been classified as fit for such a purpose. These regiments can be sent anywhere in the galaxy, potentially serving in designated combat-zones for years at a time[1]. It is not considered likely that any Guardsman will return to their world of origin; a fading memory of home is considered one of the average Guardsman's most constant companions.[4] 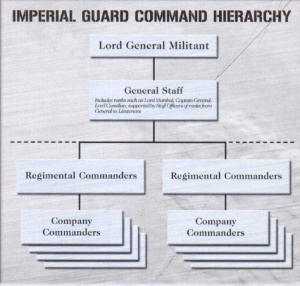 Command Structure of the Astra Militarum[3]

Whilst individual regiments are commanded by their own officers, when regiments are combined together to form a battlegroup, overall command is often placed with a General Staff specifically created for the purpose by the Departmento Munitorum.[3] Such officers and tacticians are highly trained in their esoteric art of commanding from the rear, and often stand in stark contrast to regimental commanders at the front, who more often than not lead by example.[1]

The Astra Militarum is ultimately run by the Departmento Munitorum, who have three seats on the council of the High Lords of Terra. It provides all the supplies, equipment, training, and also some of the representatives sent to worlds with an Astra Militarum presence. While they do not directly control the prosecution of Imperial military strategy, they have devolved power to different sections of the Imperium, at the planetary level, subsector level and sector level. Each world compares the threat posed to them against a previously defined threat-level and if it is deemed dangerous enough, the threat is passed to the subsector level and troops from surrounding worlds may be mobilised. If the threat increases further a full scale request to the sector level can see hundreds of worlds mobilising and converging on one system or group of systems.[3]

However this process is notoriously slow and inefficient due to the size and scope of the Imperium and its bureaucracy. A plea for aid may not be acted on for months, years, or even decades. As a result, cries for reinforcements can go unheeded for eons and fleets often arrive to find that the planet they were sent to aid has long since been destroyed.[1a][2c] 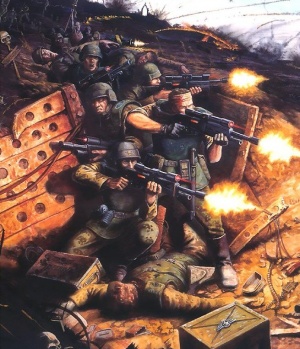 The regiment is the primary unit of the Astra Militarum. Recruited from a single planet at a single raising, it is founded as a complete entity, complete with its own officer, supply, and support cadres. It should be noted however, that like most everything else in the Guard, the precise details of even these essential elements can vary widely from world to world. Whilst the majority of the regiment, even the non-combatant personnel, will come from their founding world, the Commissars assigned to it are always off-worlders.[3]

After being raised, the regiment is shipped to its posting; they receive their training during the voyage. Their posting can be directly into the heart of a warzone, or it may be to garrison or outpost duty.[Needs Citation]

An Astra Militarum regiment is essentially a temporary unit, unlike the Space Marine chapters. After being formed they normally receive no further reinforcements. It is rarely practical for regiments to receive new recruits from their homeworlds to replace casualties, mainly due to the immense distances between a regiment's homeworld and its posting. The costs, risks, and time-lag difficulties involved in transporting relatively few soldiers to reinforce their brethren rarely justify themselves, especially when alternate and more efficient means of reinforcement tend to exist. If on garrison or outpost duty, an Astra Militarum regiment may be able to recruit from the local population. If on active combat duty, two or more under-strength regiments may be merged together in order to create a new regiment at full strength.[5] This can result in regiments being bolstered by troopers from their own homeworld, such as in the case of the Valhallan 597th Ice Warriors[6], or can result in a true mongrel unit, with the Guardsmen included coming from several different worlds (such as the Tanith First and Only).[7]

If any regiment survives for long enough, it can eventually receive reinforcement from children born to the Guardsmen who have been raised inside the regiment and can normally be expected to join it upon reaching the required age. These new recruits, officially designated as "probiters", but more commonly called Whiteshields, are formed into their own platoons where they receive their latter combat training by taking part in actual combat, until they are ready to join the regiment as Guardsmen proper.[5]

One known notable exception to this reinforcement rule is that of Vostroyan Firstborn regiments; due to the peculiar background of the Vostroyans, their Guard regiments are reinforced in the field by new recruits sent out by their homeworld, despite the difficulties involved.[8]

When reinforcement does not occur, for whatever reason, regiments may find themselves gradually depleted through casualties until they are destroyed in battle or mustered out for meritorious service. The former incidence is much more likely to occur than the latter.[5]

The Regiments of the Astra Militarum 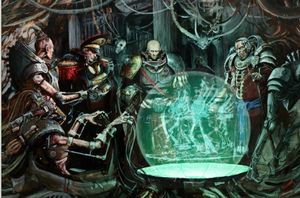 There are countless thousands of regiments spread throughout the galaxy. Some are garrisoning worlds, others are part of campaigns or crusades and some have even been forgotten about by the Departmento Munitorum and Administratum. As such there has never been and never will be an absolutely complete list of regiments available for combat.[Needs Citation]

Some of the most notable regiments include:

Other, lesser known, regiments are:

Heroes of the Astra Militarum 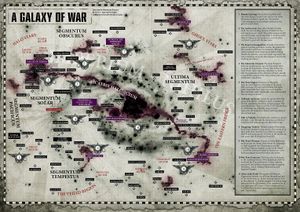 Imperial Guard deployments across the Galaxy[13d]

Certain members of regiments have become famous throughout a region, or sometimes the entire Imperium. They are often the officers or commanders rather than individual guardsmen and they are remembered as saviours of humanity, seen spreading the light of the Emperor far and wide, or protecting it from the ravages of Xenos, mutants and heretics. Some of these figures are listed below.[Needs Citation]

The Astra Militarum on the Field of Battle 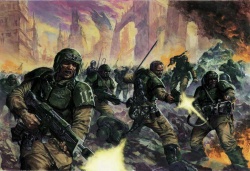 The Astra Militarum's countless regiments include all manner of infantry, cavalry - mechanised and mounted alike - artillery, and war engines. Each particular regiment is normally uniform in organisation inside itself, and often seem to specialise in one particular form of war. For instance, light infantry regiments can barely demonstrate any motorised transport and certainly possess no weapons that are not man-portable. In contrast, an artillery regiment contains little else. This ensures that the Imperial Guard are at their strongest when multiple regiments are massed together, and is itself another deliberate structure to ensure that large-scale rebellion by a military commander is difficult to organise.[1]

The armoury of the Astra Militarum is vast and covers many aspects of the equipment necessary for the survival of a fighting force in many different environments. It ranges from portable Vox-casters, communications units, to medals denoting promotion and excellence in battle.[3]

Despite the technological immensity that the Astra Militarum can deliver to the battlefield, the cold fact of the matter is that the most important resource of the Guard is the seemingly limitless number of bodies it can deploy to contest its objectives - each imperial world is obligated to make available for recruitment 10% of its armed forces per year, and armies may be gathered from a 10,000 light-year radius [11a]. It does not matter the number of casualties it may take to win a battle. The Imperial Guard will devote many thousands of men to overcome a small goal as the Space Marines would devote a few hundred. Obviously, a Guardsman could never possess the battle prowess of a Space Marine, but there are many millions of Guardsmen for just that one Space Marine.[Needs Citation]

Relics of the Astra Militarum

Due to the organization of the Astra Militarum various wrolds and regiments have their own heirlooms, comparable to the heirlooms owned by each Space Marine Chapters. Nonetheless there are certain rare relics that ware worn or wielded by several different officers, commissars or other individuals of the Imperial Guard.[Needs Citation]