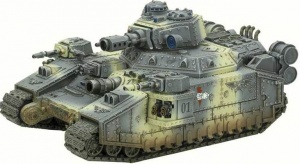 The Hellhammer Cannon is a heavy siege cannon mounted on the Stormsword and Hellhammer Super-Heavy Tanks.[1][2] It has shorter barrel with heavy-gauge suppressors which allow it to fire extremely high-calibre shells without ripping the vehicle apart.[2] The shells fired by a Hellhammer contain an unstable sub-atomic charge at their core, allowing them to smash apart enemy armour and emplacements with the fury of miniature nuclear explosion.[1]