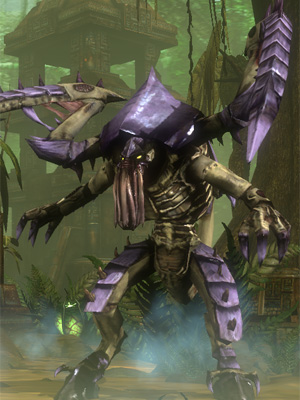 The Lictor Alpha is a rare variant of the Lictor genus of Tyranid, greater in strength, resilience and possessing abilities and biomorphs beyond those of its common variant.

Like the Lictor, the Lictor Alpha is an ambush and stealth organism, its Chameleonic Skin allowing it to ambush and disrupt enemy infantry.[1a] Like its common counterpart, it utilizes pheromones to direct the swarm, but does this with greatly increased accuracy and sophistication.[1b] It is geared for even greater independence than other vanguard organisms, its greater strength and resilience and increased stealth capabilities giving it the edge it needs to operate far ahead of the swarm.[1c]