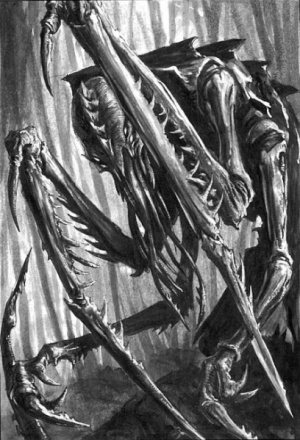 The Deathleaper is a unique Lictor created by Hive Fleet Leviathan as the ultimate Tyranid weapon of terror. Its goal is to undermine the enemy's morale, spread anxiety and confusion, and break the enemy's will to oppose the Tyranid swarm.[1]

The Deathleaper is known to have been on the Missionary World of St Caspalen. The St Caspalen Planetary Defence Force became increasingly afraid as all across the world watchguards and sentries were mysteriously vanishing, only to be found days later with their brains sucked out. Soon the St Caspalen soldiers were so afraid that they were jumping at every shadow or unexplained sound. In an attempt to ease their own fears, they gave the unidentified creature the name "Deathleaper". As Hive Fleet Leviathan approached, the Deathleaper instinctively sensed that killing the planet's spiritual leader, Cardinal Salem, would only make the planet harder to devour, as it would create a martyr and steel the resolve of the people against the coming swarm. So the Deathleaper instead infiltrated the Cardinal's cathedral-bunker and slaughtered his advisors right in front him, leaving the Cardinal unharmed but drenched in the blood and viscera of his aides. The Deathleaper repeated his process for ten days, each time bypassing the ever increasing security around the Cardinal, coming within killing distance of the Cardinal but always retreating before harming him. This lead to the Cardinal becoming paranoid and eventually losing his sanity, and did more to break the morale of St Caspalen than simply executing their spiritual leader would have. When Leviathan invaded, the world was in confusion and terror and was easy prey.[1]

The Deathleaper was first introduced in 4th Edition in the The Fall of Medusa V campaign as a new strain of Lictor with advanced chameleonic abilities which allowed it to be all but completely invisible. It was not one creature but a whole strain and there seemed to be at least one per hive swarm on Medusa V. Rather than being created by Leviathan, Hive Fleet Behemoth was heading for Medusa V with the main objective of absorbing the Deathleaper strain into their forces. Ultramarines Sergeant Erasmus believed the Deathleaper to be the first example of an evolutionary step for the Tyranids. It was feared that if the Tyranids were able to re-absorb the Deathleaper and reproduce it, the Tyranid vanguard would become virtually undetectable.[2]

At the end of the campaign, a Deathleaper creature was captured by Imperial forces but then vanished; Imperial investigations hint that the Deathleaper escaped into space aboard a freighter, killed the crew, and escaped aboard a second ship which came to investigate.[2] 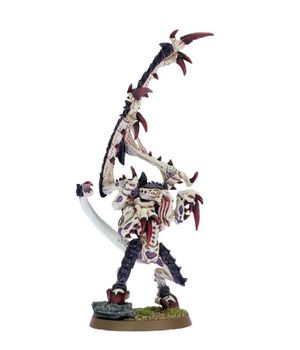