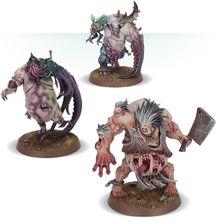 Nightmare Hulks are hideously mutated Humans who have succumb to the Gellerpox.[Needs Citation]

The beings known as Nightmare Hulks have reached the apogee of the transformation caused by the Gellerpox. It is the limit that a mortal frame can withstand before it bursts apart of becomes a Chaos Spawn. Only the tiniest shred of sanity and intellect are left in these abominations, existing only to rend and tear in the manner of a frenzied beast. Permanently enraged, the Nightmare Hulks smash towards the nearest victim. Some carry crude weapons but most prefer to attack with their mutated limbs or even to swallow adversaries whole. Their very presence will terrify lesser mortal troops.[2]

The largest and most powerful Nightmare Hulks are named Colossal Hulks.[2]