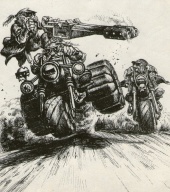 A Squat Trike was a rapid deployment heavy weapon delivery system. It had two crew members - one Squat drove the trike and one operated a heavy weapon behind. Trikes were operated by members of the Engineers Guild.[1a]

The trike was armed with a single pintle-mounted weapon such as an autocannon, Conversion Beamer, D-Cannon, heavy plasma gun, heavy stubber, heavy webber, lascannon, missile launcher, multi-laser or multi-melta. It could also carry extra missiles or grenades if it took a missile launcher. It could also be armoured with a Power field.[1b]

Some of those vehicles were heavily-reinforced to allow Hearthguards, the exo-armoured aristocratic warriors of a Stronghold, to ride them into battle.[2]

The trike then had no weapon of its own, but the squat rider was often specially equipped with a Doom Lance.[2] 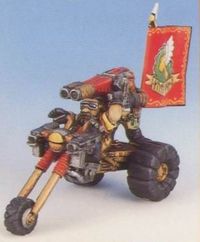