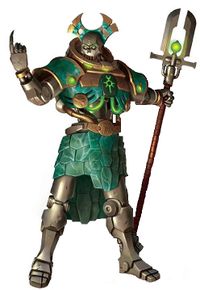 Overlord Ahhotekh was raised as a senior member of his dynasty, serving in the Royal Court of the Crimson Scythe, but he never anticipated attaining high office. So total and uncompromising was his Phaeron’s rule that none of Ahmontekh’s underlings seriously contemplated any sort of disloyalty towards him, for all knew the fate that would befall them should they do so. After biotransference, all treachery was rendered impossible due to the command protocols imprinted in the mind of every Necron. Instead of plotting against his lord, Ahhotekh therefore spent much of his time before the Great Sleep plotting against his peers. Throughout the War in Heaven, Ahhotekh maneuvered those forces he was entrusted with leading in such a way as to advance his own position over his rivals, and always to the detriment of others. No matter how the dynasty’s Phaeron conducted his wars, it always seemed that Ahhotekh’s legions suffered fewer losses than those of any other Overlord. On numerous occasions, Ahhotekh’s rivals for the Phaeron’s favor sought to confront him, but somehow Ahhotekh always frustrated their efforts to call him to account. By the end of the War in Heaven, Ahhotekh had ascended to a position of great influence, although many of his peers were unaware of its true extent, for his hand was ever hidden. Somehow, it appears that throughout that last, epic confrontation within the depths of the webway, Ahhotekh’s rivals suffered numerous set backs and disproportionate losses, which, it transpires, the Phaeron was somehow convinced were the fault of the Charnovokh Dynasty. Whether it was a deliberate ploy on Ahhotekh’s part or a case of him taking advantage of a rapidly unfolding situation can only be known by the overlord-regent himself, and he is unlikely to share the truth.[1]

In character, the Regent Ahhotekh is a consummate schemer and a master of intrigue. He is utterly brutal in the persecution of his enemies, whether political rivals within his own dynasty, members of other Necron dynasties, or the lesser beings of the galaxy’s numerous mortal species. He has never turned his hand against his own Phaeron, however, for the command protocols burned into his thought engrams during biotransference remain in place and will as long as Ahmontekh lives. Like his fellow members of the Phaeron’s royal court, Ahhotekh is utterly incapable of acting against his lord, despite the murderous carnage he has inflicted upon his peers.[1]

Despite the regent’s expertise as a master manipulator, there is one thing he is not, and that is a being overly keen to get blood on his own hands. It is not that Ahhotekh is incapable in battle, for as a senior courtier at the time of bio-transference he was gifted with a body as strong and tough as any opponent he might ever meet upon any field of battle. Rather, Ahhotekh has ever regarded physical combat as a crude affair practiced by those of his servants incapable of much else. In practise, this means that when Ahhotekh does dirty his hands with bloodshed, he does so in what he regards as a highly refined manner according to the ancient martial codes of the Necrontyr. He has, in his time, fought against numerous enemy champions, and prevailed against them all, yet he only indulges in the slaughter of lesser creatures when there is little other option. When possible, Ahhotekh uses the most expeditious method possible of disposing of lesser enemies, utilizing arcane weapons of terrible mass devastation to rid himself of such foes. When faced with a creature worthy of battle, however, he revels in demonstrating the abilities of his C'tan wrought mind and body.[1]

Since his awakening and his unexpected ascension to the position of overlord-regent of the Suhbekhar Dynasty, Ahhotekh has worked tirelessly towards the full reawakening of the Hollow Sun crown world. The fact that the Phaeron Ahmontekh lives still, albeit in a limbo between life and undeath, has placed limits upon the regent’s abilities to fulfill his unanticipated destiny and, thus, much of his energies are turned towards breaking this deadlock. The regent’s most pressing concern is to somehow extract the command protocols from the slumbering Phaeron’s mind without unintentionally slaying him (which would result in the permanent loss of the protocols) or causing him harm (which Ahhotekh cannot do, due to his own conditioning). The search for a means of doing so has taken the overlord-regent and the senior Crypteks of his court to numerous dread places within the Jericho Reach. In so doing, Ahhotekh has uncovered tomb worlds and other Necron holdings formerly known only to the slumbering Phaeron, and whether he knows it or not, his actions have contributed to the advancement of certain passages long foretold by the contents of the Derleth Lexicon.[1]