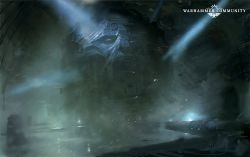 The Votann Ancestor Cores were created long ago for the original mining fleets from the primogenitors of the Leagues of Votann. These fleets were given advanced thinking machines to give them wisdom and aid for what they would require for their missions. Over the millennia these cores have been changed, becoming ponderous and senescent, yet remaining potent repositories of knowledge.[2]

Today, each League secretly possesses one and they are referred to as the Votann, to hide the Ancestor Cores' true nature to outsiders. This is because they are central to the Leagues' way of life and the Ancestor Cores' self-organizing datastacks and quantum infocores, hold all the information a people might need to survive among the stars. These include weapon specifications, military theory, genealogical data, science, philosophy, and even Standard Template Constructs. Because of this, the Ancestor Cores are as sacred to the Leagues as gods are to more spiritual races and no Squat would hesitate to lay down their lives to protect the Votann. This includes against the Imperium itself, for if the secrets of the Ancestor Cores were ever revealed to the Galaxy at large, it would shatter the uneasy peace the two allies have with each other.[1]

Currently, however, the Ancestor Cores have begun to develop quirks and deficiencies, due to their millennia of constant usage. Their creators did not design them with this in mind and even cogitators of near-limitless power can eventually run out of memory. The sheer weight of data they have been forced to compute for so long, has now begun to slow the Ancestor Cores down. Some have even developed idiosyncrasies – what might even be termed “personalities”. When once the Leagues would have received an answer to a tough question in a matter of moments, some Ancestor Cores can now take decades – or even centuries – to deliver the same solution. As time goes on, the Ancestor Cores are notably becoming more eccentric and mercurial.[1]

It is perhaps a great irony that the Kin may be contributing to the decline of the Ancestor Cores. The Cores have long borne responsibility for regulating the genomic data required to breed each new generation of Kin, even as the race has grown exponentially. Most demanding of all, they have also accepted into themselves the accumulated and often duplicated data of endless generations of dead Kin and Ironkin. While originally an act of practicality, in recent millennia it has taken on a ritual element that has seen huge amounts of information overload the minds of even the most advanced Votann.[2a]

Kin who can commune with ancestor cores are known as Grimnyr or sometimes Living Ancestors, and are universally respected.[2]

The name Votann is likely inspired by the germanic god Wotan or Odin who is known as the god of knowledge, wisdom and war.