Deathwing is a short story anthology of tales set in the Warhammer 40,000 Universe, edited by Neil Jones and David Pringle (although the Black Library website states that it was edited by Marc Gascoigne and Andy Jones).[1]

It was originally printed in 1990, but was reprinted by Black Library with three new stories in 2001, with the original stories revised to adhere to the current background.[3]

The original lineup of stories (edited by David Pringle alone) was:

Veteran Dark Angels Captain Ezekiel — also known as Cloud Runner — returns to his homeworld to recruit new brethren for his Chapter... only to face an insidious enemy. Dare Cloud Runner undergo the Rite of the Deathwing and leave his mark on history?[1]

The thirty or so survivors of a Company, 5th Thranxian Regiment — also known as the Devil's Marauders — are in a race against time... and a race against death.[1]

Jomi Jabal is sixteen years old and like many boys his age is full of questions about life, the universe and girls. Unlike many other boys his age, he has a helpful friend able to answer any and all of his questions. His friend speaks directly into his mind, and plans to come to see him soon...[1]

Romance blossoms between the Navigator and Astropath of a fairly ordinary freighter, but a love expresed in the warp can never be just ordinary.[1]

It's time for the world of Hito to join the Imperium. When the diplomatic envoys sent to a make sure this happens are an Imperial Assassin and an Imperial Judge, do the inhabitants of Hito really have any say in the matter?[1]

When the corruption of Chaos can gain purchase in so many ways, is there any room for doubt? This notion is put to the ultimate test by the crashed survivors of an Inquisitorial retinue.[1]

The Alien Beast Within

Imperial Assassin Meh'Lindi is tasked with her most demanding mission yet; one that may destroy her very conception of self.[1] 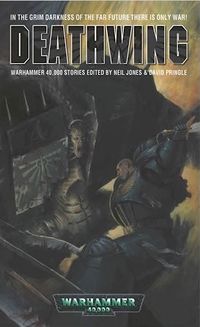 The amended 2001 lineup (edited by David Pringle and Neil Jones) included the above tales as well the following new stories:[1]

When a mysterious and fatal malady sweeps through the Genovingian System, Imperial recollector Lemual Sark is determined to track down any information that may aid in stopping the pandemic.[1]

Suffer Not the Unclean to Live

Main article: Suffer Not the Unclean to Live (Short Story)

A tale of Karis Cephalon. Mutant uprisings and Imperial corruption are on the minds of both the Ecclesiarchy and an Inquisitorial agent.[1]

Battling cultists devoted to the Ruinous Powers, Dark Angels Sergeant Kaelen discovers that his Chapter has secrets... secrets that could damn them all.[1]

The first edition of the anthology has a misprint in its list of contents - the list claims that The Alien Beast Within (Short Story) begins on page 293 when in fact it starts on page 203 (indeed, there is no page 293 in the book).