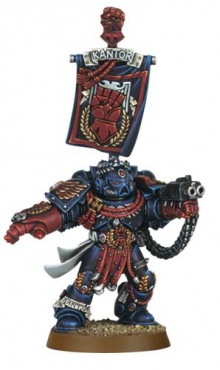 Dorn's Arrow is an ancient and venerated Storm bolter wielded by Chapter Master Pedro Kantor of the Crimson Fists Space Marines. It is capable of a high rate of fire, even more so than a standard storm bolter, as well as capable of penetrating thicker armour. Dorn's Arrow attaches to the left glove of Kantor, leaving his left-hand empty during battle.

It is named after Primarch Rogal Dorn of the Imperial Fists, from which the Crimson Fists were founded.[1]