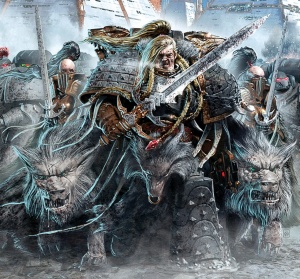 Leman Russ flanked by Freki and Geri at the Battle of Prospero.[2]

Freki and Geri were the wolfsiblings of Russ from the time after his landing on Fenris when he was housed and raised by a female Fenrisian wolf. Freki was hotheaded, in contrast to Geri, who was experienced and contemplative. Both, especially Geri were said to be very intelligent. The identity of the wolves' mother can only be guessed.[Needs Citation] They were known to be especially long-lived by the standards of their kind.[5]

Two unnamed colossal wolves, one black and one white (presumably Freki and Geri), fought at Leman Russ's side in the Battle of Prospero. When Magnus the Red managed to drive a devastating psychic spear through Leman Russ's chest in their conclusive duel, the two wolves defended their master and leapt upon Magnus, fastening their jaws upon his legs. In response, Magnus shattered the black wolf's head with his fist and telekinetically hurled the white wolf over the heads of the Space Wolves army. The white wolf's ultimate fate is unknown.[1]

Freki and Geri were released together with Leman Russ as miniatures for Rogue Trader, and by Forge World (under the title "The Wolf-Kin of Russ") as part of its Horus Heresy Character Series.

Geri and Freki are Odîn's wolves in Norse mythology.

In an apparent sources contradiction, in Wolfsbane (Novel) both wolves are shown to still be alive.[3]