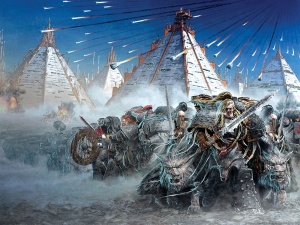 Prospero Burns by Dan Abnett is the fifteenth novel in the Horus Heresy Series. Though marketed as the second part of a duology with Graham McNeill's A Thousand Sons (Novel) that describes the Burning of Prospero from the perspective of the Space Wolves, it is narrated by a human character, Kasper Hawser, and focuses mostly on his life and experiences as a skjald for the Wolves.

The novel was originally scheduled to be published in April 2010, however due to author Dan Abnett being diagnosed with epilepsy the publication date was moved back to January 2011.[2] Prospero Burns reached number 16 on the New York Times best-seller list in the paperback best sellers mass-market fiction section. This was the first time a Black Library novel made in into the top 20.[1] It was later included in "The Novels: Volume 3" eBook collection, and it was included as part of The Razing of Prospero omnibus, released in paperback on July 12, 2016.

The Emperor is enraged. Primarch Magnus the Red of the Thousand Sons Legion has made a terrible mistake that endangers the very safety of Terra. With no other choice, the Emperor charges Leman Russ, Primarch of the Space Wolves, with the apprehension of his brother from the Thousand Sons home world of Prospero. This planet of sorcerers will not be easy to overcome, but Russ and his Space Wolves are not easily deterred. With wrath in his heart, Russ is determined to bring Magnus to justice and bring about the fall of Prospero.[3]

On the planet Fenris, the Ascomanni tribe come under attack by their rival tribe the Balt for harbouring a 'bad star' that fell from the sky, in reality human Conservator Kasper Ansbach Hawser whose craft was accidentally shot down as he arrived in Fenris airspace en route to join the Space Wolves Legion as a cultural observer. Four Ascomanni warriors flee their settlement with Hawser but one is killed when their craft flips on sea ice and another dies defending him from a massed attack by the Balt and Hradcana. Hawser's last two defenders are about to be killed when a lone Space Wolf arrives and massacres the attackers. The Astartes, Bear, was the one who accidentally shot Hawser's craft down and thus was responsible for rescuing him. Hawser demands that Bear take the surviving Ascomanni Fith and Brom with him and all four board Bear's craft before Bear gouges out Hawser's right eye and he passes out from the pain.

Hawser spends a prolonged time dreaming before awakening in the Aett, fortress of the Space Wolves. Afraid and disorientated he fights off several Legion thralls before running into a Space Wolf who brings him before Amlodhi Skarssen Skarssensson, Captain of Fyf, the Space Wolves' Fifth Company. Skarssen and his Rune Priest Ohthere Wyrdmake reveal that Hawser's aged body has been physically rebuilt and enhanced by the Legion's Apothecaries, who added a light-sensitive wolf's eye to replace the taboo augmented one gouged out by Bear, but they cannot explain Hawser's understanding of Juvjk and Wurgen, the Space Wolves' everyday and combat languages. They reveal that Hawser has been kept in induced sleep for nineteen Fenrisian years, almost seventy Terran ones.

Throughout the novel flashbacks reveal details about Hawser's past including his childhood at a desert orphanage, his career with the Conservatory and his efforts to preserve its independence from the Administratum. One flashback describes an encounter between Hawser's archaeological team and Fifteenth Legion Astartes sent to secure the area where Hawser's team were investigating, during which the Astartes took a strange interest in Hawser's name. His decision to travel to Fenris late in life is explained as the product of academic curiosity and frustration at Terran bureaucracy sabotaging his vision for the Conservatory, but other characters cast doubt on this and imply that someone else may have planted the idea in his head.

Hawser takes up a role as Tra (Third) Company's skjald, or storyteller, and accompanies them as they prosecute the Emperor's Great Crusade. During the 40th Expeditionary Fleet's assault on the Olamic Quietude Tra Company is summoned to help conquer the technologically advanced branch of humanity and Hawser witnesses them in action, afterwards telling the stories of Space Wolves killed in combat. After a strategy meeting in an Imperial Army camp some soldiers attack Hawser for mere association with the 'bestial' Sixth Legion, but despite having no training he badly injures all of his attackers while trying to defend himself, revealing the extent of the Legion's improvements to his strength and reflexes. During an assault on one of the Quietude's subterranean cities Tra's Rune Priest, Ulvurul Heoroth, is mortally wounded defending Hawser from Quietude super-soldiers, and Hawser stays with him as he dies. Hawser tells a story from his time as a Conservator on Terra, of an incident when his arrogant colleague Navid Murza employed crude low-level magic to help the two of them escape an ambush by thugs and took Hawser to meet members of an arcane cult he had secretly been serving his whole career. After discovering that Murza had been collecting notes on artefacts depicting the Eye of Horus for the cult Hawser resisted their attempts to recruit him, eventually threatening them to make them back off, at which point they evaporated into thin air. Heoroth disagrees with Hawser that it is the most frightening story from his life and takes him into one of his own tales, in which both are nearly killed by a Fenrisian animal before a large black wolf intervenes and saves them, a wolf Heoroth reveals is the reincarnated form of Brom, the Ascomanni warrior who died of injuries he sustained protecting Hawser from the Balt. Hawser refuses to believe this is true despite it explaining the supernatural truth behind the saying 'there are no wolves on Fenris'. He emerges from their shared dream-state to find Heoroth twelve minutes dead, leaving the last twelve minutes of their conversation unexplained.

Tra Company hold a prolonged funeral for Heoroth during which Hawser recites many tales of his life given to him by other Space Wolves. Tra's leader, Ogvai Ogvai Helmschrot, selects Aun Helwintr as the company's new Rune Priest and Hawser causes a minor disturbance when he exclaims that the knife Ogvai uses in the ritual is the same one he saw in the hand of one of the cultists he encountered that day on Terra. Later Helwintr explains to Hawser that someone has been psychically manipulating him without him realising, making him come to Fenris and confuse Ogvai's knife with the one from the past when they are plainly two different weapons. The Space Wolves have always been aware that Hawser is a spy for an unknown outside force, but kept him around to see what would happen.

The Space Wolves First, Third and Fifth Companies are summoned to Nikaea for the conclave on the use of psyker powers by the Legions. Hawser is left in a room with Silent Sisters whose presence as Pariahs negates the psychic influences on his mind, and thus he is initially unable to understand when Leman Russ talks to him. Russ, Fulgrim, Constantin Valdor, Raldoron, Calas Typhon, Gunnar Gunnhilt, Ogvai, Skarssen, Helwintr and Ohthere Wyrdmake all gather to interview Hawser, revealing that they believe he is a deep-cover spy psychically implanted by the Thousand Sons the day he encountered them on Terra and placed among the Space Wolves so Magnus would have advance warning if they were ever sent to censure him for his use of sorcerous powers. Escorted from the chamber by Custodian Amon Tauromachian, Hawser is confronted by Amon of the Thousand Sons who uses the name he shares with the Custodian to paralyse him and confirms everything that was just revealed. Bear and Aun Helwintr arrive, and though Amon is able to use Helwintr's name to injure and overpower him the same technique does not work on Bear and Amon is driven off badly wounded.

After the Emperor renders his verdict the Space Wolves move on to a planet named Thardia, where Helwintr begins helping Hawser explore a recurring dream from his last days on Terra in which he spots someone standing behind him by their reflection but always awakens before realising who they are. Fith Godsmote, the only Ascomanni warrior to survive defending Hawser from the Balt who subsequently became a Space Wolf, teaches him axework so he will not be helpless in combat. After a session with Helwintr Hawser wanders off to practice axework and is found by Ohthere Wyrdmake, who warns him that something terrible has happened and leads him into the woods. Wyrdmake reveals that a second Rune Priest Eada Haelwolf was attempting to break into Hawser's mind while Helwintr's attempts kept the being acting on Hawser distracted, and orders him to stay put while he goes on reconnaissance. Hawser hears Wyrdmake get injured and spots a large, shadowy wolf among the trees. Encountering Eada Haelwolf the injured Rune Priest warns him that he and Helwintr found a door in Hawser's mind that led to the being influencing him but that it detected them and possessed Helwintr. Helwintr arrives and reveals that Haelwolf was the one who got possessed, and he and Wyrdmake team up to bring down Haelwolf when he transforms into the shadowy wolf. Taken captive, Haelwolf confesses that he glimpsed the anatheme and a plot against Horus while possessed, but Ogvai dismisses this and executes him.

The Space Wolves are summoned to Prospero to bring Magnus to justice for breaking the Edict of Nikaea. Leman Russ uses Hawser as a conduit to give Magnus a last chance to surrender but receives no reply. The Space Wolves invade the planet and Hawser makes his first kill against one of the Prospero Spireguard. While fighting in a temple he suddenly finds himself in the room from his dream, where a Chaos entity masquerading as Horus appears and Hawser realises that it was the being from the dream. It confesses that it manipulated him into going to Fenris and framed the Thousand Sons for the act by appearing as Amon on Nikaea while the real Amon was elsewhere, all as part of a bigger plan to turn the two Legions against each other. Fith, Bear and Aun Helwintr arrive but the entity overpowers them all using their names bar Bear whose arm it sets alight. Hawser cuts off Bear's arm to save the rest of him just as two Dreadnaughts and a cohort of Silent Sisters arrive, led there by the Wolves to kill the being. Its powers sapped by the Silent Sisters, the Chaos entity is helpless as the Dreadnaughts shoot it to pieces. Bear's real name is revealed as Bjorn, imperfect language imprinting by the being led to errors in Hawser's speech where animals were concerned and meant it could never use the name Bear against him as it was wrong. The Thousand Sons are defeated and the Space Wolves depart Prospero. After the battle Kasper Hawser has one final conversation with Leman Russ before voluntarily going into indefinite stasis so he cannot be used against the Wolves again.