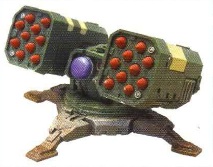 The Hyperios Missile Launcher is a specialized, anti-aircraft missile launcher mounted on Space Marine Whirlwind Hyperios. It is capable of firing up to twenty Hyperios missiles at fast, low-flying targets, making it ideal for defense against ground-attack craft making strafing runs.[1a]

Due to a lack of manpower for dedicated air defense units in Space Marine Chapters, It is common for Hyperios Missile Launchers equipped with automated remotely-activated defense systems to be utilized by Space Marine forces for local air defense. These automated platforms are dropped in by Thunderhawks, activated by the chapters Techmarines, and can be monitored via command vehicles.[2]

The Hyperios Anti-Aircraft Missile functions in a similar fashion to a Hunter-Killer Missile. Tracking equipment within the missile locks onto a target, which feeds information to a logis-engine. Once fired, the logis-engine manipulates the missile's fins in order match the target's movements, avoid obstacles, and destroy it. Most of the missile's mass is taken up by fuel needed to intercept fast-moving targets, allowing it to fly short distances at high velocity. The Hyperios missile does not contain enough fuel to reach high-altitude targets, which are better suited to Manticore AA missiles.[1b]

Due to the versatility of its tracking equipment the missile can also be used against ground targets, although this is often a case of last resort for a Space Marine Commander.[1a]