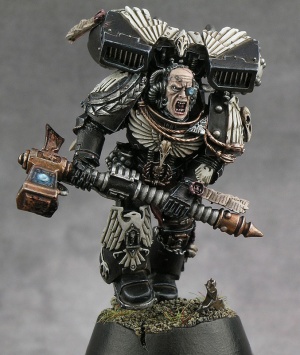 Kalae Korvydae is the current Captain of the Raven Guard Chapter's 10th Company.[1]

Korvydae is seen as a fearsome opponent in combat, exemplifying his Chapter’s mastery of hit and run tactics.[2] He also serves as the Raven Guard's Master of Recruits and overseer of the training of the Space Marine Scouts. However, Korvydae himself prefers to delegate much of the actual training to his subordinate Sergeants in preference for leading his men into battle.[3]

Korvydae was recently absent from his position within the chapter; having planned and lead the ill-fated Raid on Kastorel-Novem in 992.M41, Korvydae volunteered for two years of service in the Deathwatch to atone for his failures.[3]

Korvydae is a master of raiding and sabotage tactics, preferring to field a fast-moving assault force, giving prominence to Assault Squads in his plans for capturing and holding objectives.[3]

He leads his Scouts in long range recon and sabotage missions, relaying reports to other units which can then enact the lightning hit-and-run raids that the Raven Guard are famous for.[3]

In comparison to his contemporary captains such as Kayvaan Shrike, it is noted that very few outside of the chapter have ever heard of Korvydae. This is agreeable to Korvydae as he prefers the anonymity of leading his stealth or lightning strike raids where his work can remain unseen.[3]

Korvydae equips himself with a Jump Pack, Bolt Pistol, Artificer Armour and a Thunder Hammer drawn from the chapter armoury as well the Iron Halo as befits his rank.[3]