The Lady of the Voids

From Warhammer 40k - Lexicanum
(Redirected from Lady of the Voids)
Jump to: navigation, search 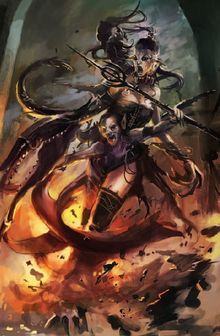 The Lady of the Voids[1a]

The Lady of the Voids is a name given by the Imperium to an unknown breed of Slaanesh Daemons that are often part of the vile host that trails its voidships as they travel established Warp–routes. However, unlike her lesser brethren who can merely follow the ship ineffectually, a Lady can prey upon a moment of weakness from a Navigator or Astropath in order to possess them and pass through their vessel's Geller field. The Lady then manifests aboard the vessel, by causing their possessed victim's body to burst apart and the site of the Lady draped in torn flesh and entrails of their former crew member is enough to break the weak of will of anyone aboard the vessel. Her nightmarish physical appearance though, makes it all the more easier to do so. The Daemon appears as a nightmarish merging of several female bodies about a vertical axis—faces, arms, and mouths facing in different directions; while her torso is a hideous mix of woman, crab, and bloated toad, whilst half of her arms end in spiny pincers. The most dangerous thing about the Lady however, is her constant siren call which can make anyone hearing it go mad.[1a]

As soon as she appears the Lady's many voices scream and moan this dreadful Warp–song, that enraptures all who hear it. To them, the Lady is a beauty to burn the soul and their sanity flees as the Warp–song melts their mind, and soon causes a foaming madness to take hold of the afflicted. Some crewmen begin mutilating themselves; others turn to destroy tech–devices, murder one other, or struggle to open the seal–gates and let in the void. Eventually though they all fall under the Daemon's will and the Lady gleefully sweeps through the stricken vessel at the head of a growing horde of the insane; set upon multiplying the suffering of her puppets in an orgy of destruction and death.[1a]

Though their doom is almost certain, there are some measures the crew of a stricken vessel can do to save themselves: of vital importance of course is to make sure they can not hear the Lady's siren song. Plugging their ears, constantly yelling the Emperor's praises, or even sealing themselves within an insulated area, can help save them from the Daemon's voice. The most direct way however, is to face the Lady in battle and send her screaming back into the Warp. Though they would have to face a madden horde, composed of their fellow crewmen to do so, ending the Lady's song would save their vessel and free those who fell under the Daemon's power.[1b]