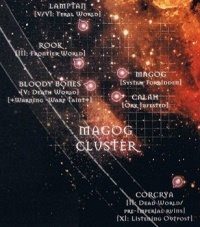 Map of the Magog Cluster[1].

The Magog Cluster is a star cluster located within the Maelstrom Zone in the Ultima Segmentum, near The Maelstrom. Several battles were fought in it during the Badab War.