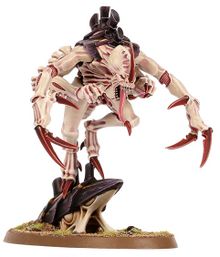 The Spawn of Cryptus[Needs Citation]

The Spawn of Cryptus is the designation given to a Tyranid Broodlord who led forces from Hive Fleet Leviathan against the world of Asphodex.[1][3a][Conflicting sources]

The Spawn was born Tiberius Flax to the ruling governors of Asphodex and declared the heir to the Flaxian Dynasty before his birth, despite the family already having a suitable heir in the form of Augustus Flax. Matters became worse when Tiberius was born a mutant, as the governors were infected on a trading mission to Satys. Augustus Flax was able to rally the support of the nobles of Asphodex, leading a coup against his parents and his "brother" and seizing the throne. Tiberius, however, had been sealed away in the undercity of Phodia by his parents to protect him and escaped Augustus's coup. Retreating into the bowels of Phodia, Tiberius became known as the Spawn of Cryptus.[3b]

The Broodlord was eventually able to corrupt the ruling family of Asphodex. When the Blood Angels fleet arrived to wage the Cryptus Campaign, Captain Karlaen led a series of operations in the cities of Asphodex that managed to slay the Spawn of Cryptus and scatter its cult.[2]