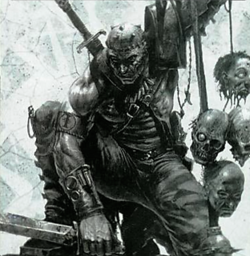 Stone is an Imperial Guard Sergeant and Gland Warrior.

When the Forge World of Dantris III was invaded by Tyranids, regiments from the nearby world of Lostok were drafted to combat the Xenos menace. Finding the planet heavily polluted and infested by the Tyranids, fighting outside the factory-complexes was almost impossible for the Imperial forces. However, a few companies of the Lostok 23rd were modified by Techpriests to fight in this hellish warzone, incorporating many organs and drug-secreting glans that enabled them to survive unprotected as well as boosting their combat effectiveness. Despite these enhancements, only three of these "Gland Warriors" are believed to have survived the conflict, and Sergeant Stone was one of them. After the successful defense of Dantis III, Stone was amongst those taken by the Inquisition for study, later ending up in the retinue of Inquisitor Tyrus.[1]