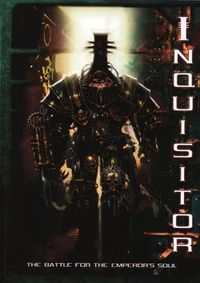 The Inquisitor Rulebook is the core rulebook for Games Workshop's Inquisitor game. It was first released in 2001.

This chapter describes rules and gameplay, as well as detailing characters and their abilities.

A descriptive list of the weaponry available to the characters in the game.

The background section of the book provides tips for player-generated characters, rules for special characters and offers background on the available factions in the game:

Advice for the Gamemaster, including a sample scenario and scenario concepts.

During the production of this book, the following persons were involved considerably: