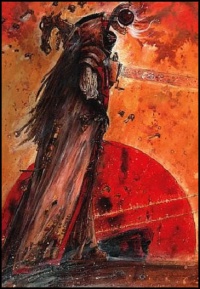 Xiao is the Calixis Sector's Senior Astropath. He is an improbably tall and broad-shouldered man with a shaven head and large grey-streaked beard. His blindness - he wears an embroidered band around his head to cover his empty eye sockets - is the only note of physical weakness about him, for even in his robes he is obviously a large and muscular man. Xiao does not permit anyone to send a message through his astropaths unless he deems it necessary. Lord Hax is rarely refused by Xiao, but anyone else must justify the use of the astropaths' rare talents.

Although Xiao is unfailingly polite, he is still a very intimidating man and calmly refuses to compromise once he has made his decision. Xiao is one of the most powerful psykers in the Calixis Sector but he never sends astropathic messages personally, even for Hax, always having one of his astropaths do so instead, although it is rumoured that he has an arrangement with someone very powerful for whom he sends messages exclusively.