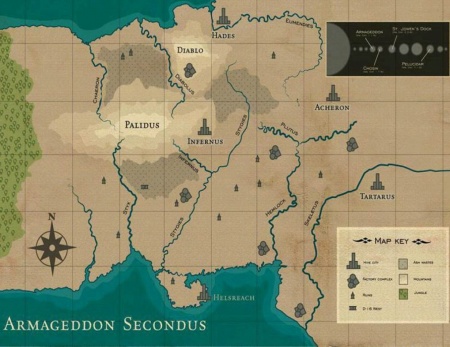 It is a massive region containing several hive cities that work to provide over 80% of the planets material wealth which is vital for the Imperiums war effort. It has been the site of most of the fighting in all three wars. During the First War for Armageddon the revolts that preceded the arrival of Angron and the World Eaters were easily put down, lines of communication being much better in Secundus than in Prime. Imperial forces fell back through Prime to Secundus and made a last ditch stand at the rivers Styx and Chaeron. The fighting was fierce all along the river line and Chaos forces broke through where Angron fought. He led his forces against two of the major hives, Hive Infernus and Hive Helsreach until Angron was banished by a company of Grey Knights.

The Second War for Armageddon had a very different effect on the Secundus region. Ghazghkull Mag Uruk Thraka saw Secundus to be the main priority when landing and sent three entire tribes in an attempt to conquer it, well over half of his forces. Von Strab, the inneffective Planetary Commander, had Commissar Yarrick banished to Secundus for sending out a distress signal. When it was obvious that the north would fall, Von Strab retreated to the south, abandoning it to the Orks. The vast jungle between Prime and Secundus was said to be inpenitrable to the Orks, however it was soon seen that it was not.

There are several major hives in Secundus. These include:

Hive Infernus was the first to fall. Hades Hive was besieged at the same time, although the presence of Commissar Yarrick prevented the Orks from taking the Hive for a long time, drawing in more and more of Ghazghkull's forces. Hive Helsreach, being a major shipping port and vital to the defence of Secundus, was besieged quickly, althouth the defenders put up a strong fight. Some welded themselves into massive cranes and did battle with Gargants. After the conquests of Infernus and Helsreach, the Ork forces spread south towards Hive Acheron. As the Orks approached, a massive wave of Space Marines crashed onto the surface. They prevented the capture of Achaeron and allowed the Imperial forces a brief respite. Hades Hive fell just before the Space Marines could arrive, the body of Yarrick was found surrounded by Orks. Ghazghkull gained reinforcements from the north and started a new attack on Tartarus Hive. He quickly broke through the thin lines of defence and sieged Tartarus. The Space Marines countered fiercely and managed to kill the Orks so only a few survived. It is said Ghazghkull died here, and when news spread to the Orks they knew it was over. The ranks broke and were pushed back into the jungles within six months.