Gorkamorka is a vehicle-using campaign game produced by Games Workshop, set on the desert world of Angelis, prominently featuring Orks.

The player takes control of a group of warriors with the object of the game being to gain wealth and experience. The rules were roughly based on the second edition of Warhammer 40,000, with extra vehicle rules added and an extensive campaign system.

Aeons ago, a Space Hulk filled with Orks on a Waaagh! (a huge Ork invasion), crashed into Angelis, plowing a massive canyon, "Da Skid", and devastating the world's ecosystem. The Orks, a race who can survive just about any catastrophe, promptly decided that this wasn't the Waaagh! and resolved to find a way off-world as quickly as possible. They turned to their Mekboyz (Ork technicians, engineers, mechanics and the closest thing they have to scientists) for aid, who set the other Orks to work gathering up wreckage from the crash. Construction began on a huge machine, although what it was going to do differed depending on the ideas of the individual Mekboy.

The lack of unity in the construction and the machine's resemblance to a religious idol led to conflict amongst the ork population. A religious schism occurred and factions formed based around whether believers felt the idol was of the Ork god Gork or Mork. The resulting violence destroyed the entire machine, forcing the Meks to broker an unsteady peace between the warring sides. From then on the machine would be known as Gorkamorka, at least until the day of completion.

Angelis was a suspected Necron tombworld, prompting Imperial efforts to assess the planet. At the time of the crash there were surveyors underground within the pyramids, an Imperial outpost, and an Imperial cruiser in orbit. The cruiser was brought down by the hulk with the disfigured descendants of the crash survivors became "Muties", while those inside the pyramids became primitive tribals known as "Diggas".

The object of the game is to lead a group of warriors to fame and fortune within the setting. Players choose from a range of factions with varying motivations and abilities and fight battles against others. Most of these groups are between five and fifteen fighters with appropriate transport, known as a "mob". Battles take place in an assortment of locations and scenarios, including sieges, races, and rescue missions.

The gameplay is not dissimilar to Necromunda, which also revolves around small gangs. The primary difference is the inclusion of vehicles, although there are many significant differences that lead to Gorkamorka being a less "serious" game by comparison, characterised particularly by less lethal ranged combat and the bizarre nature of the Orks.

Games are designed to be played in a series and form a campaign, wherein fighters gain new abilities and suffer permanent battle injuries or death, and new warriors are purchased, or "retire" once they get to too high of a level. Players earn money ("Teef") based on how well they perform and the relative strength of their opponents. The campaigns are designed to be open-ended, allowing new players to join and leave at any time thanks to a mechanic which adjusts the rewards players receive evening out the power disparity. The closest thing to winning a campaign would be reaching the "retirement" level before other players. 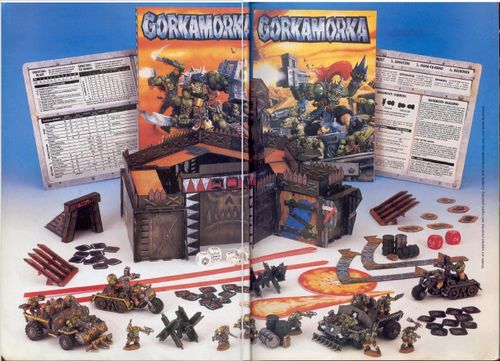