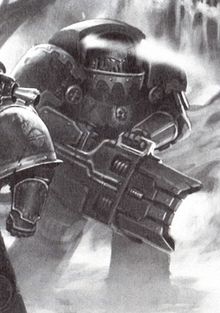 Ignatius Numen was a Battle Brother of the Iron Hands Legion, who escaped from Istvaan V with a contingent of Iron Hands aboard the Sisypheum.[1a]

He was a Morlock Terminator. During the Emperors Children assault on the Sisypheum he was severely injured and afterwards his burnt eyes had to be replaced by augmetic and he lost his hearing. He survived the assault, later made planetfall and became a key participant in the Battle of the Sepulchre of Isha's Doom. His very deafness gave him a critical advantage over Marius Vairosean of the Emperors Children, the first ever Noise Marine, and Ignatius Numen used this advantage to destroy Marius utterly with a Volkite Cannon.[1b]