Iron Hands is a novel written by Jonathan Green, featuring the Iron Hands Space Marine Chapter. It was first published in 2004.

With Abaddon the Despoiler's Thirteenth Black Crusade engulfing the galaxy, Iron Father Gdolkin and his company are pulled away from the defence of Medusa to honour an ancient oath to the Adeptus Mechanicus. A trail of clues leads Gdolkin to a long-lost world, home to an ancient weapon that might turn the tide of war in the Imperium’s favour. But for Gdolkin, the quest is personal, as this mysterious planet might also contain the answer to the oldest mystery of the Iron Hands Chapter... the resting place of the Primarch Ferrus Manus.

During the Thirteenth Black Crusade, there is an imminent invasion of the Iron Hands' homeworld, Medusa, by Chaos forces. However, bound by sacred and ancient oaths made with the Adeptus Mechanicus, the chapter is forced to send Iron Father Gdolkin to help them in a mysterious mission concerning alien artifacts.

Gdolkin quickly discovers that Chaos forces are at work to capture a weapon that would tip the balance against Imperial forces in the Thirteenth Black Crusade. Gdolkin must use all his skill, power, and his iron will to stop them, no matter the costs. Believing to be able to find his Primarch he sets off on a journey to stop the Word Bearers of the Iscariot from compleing their dark plot. 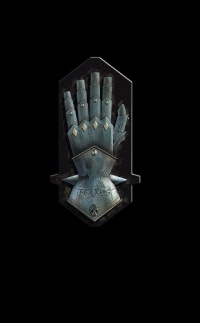 Cover art for the 2011 edition