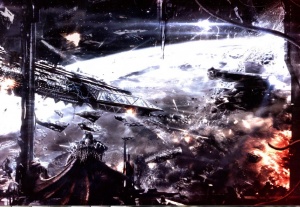 Kheron Ophion on the bridge of the Shroud of Eventide

Kheron Ophion was Captain of the Night Lords' 39th Company and an officer of the Kyroptera during the Great Crusade and Horus Heresy, known as the Coward for his stubborn bravery, which was considered something of an aberration among the Night Lords.[2b]

Kheron Ophion was born on Nostramo, raised up from the gutters of to become a Legionary of the Night Lords. His first command, the Killing Whisper, was attached to the 67th Expeditionary Fleet. The Killing Whisper was destroyed over Pragus when Ophion sought to stand off against an entire Fra'al conclave while the fleet retreated. The Praetor of the fleet had fragments of the ship's hull plating forged into a combat shield covered in vicious ceramite barbs called the Bloody Aegis - a personal reminder to Ophion of the cost of such bravery, as much a mark of shame and cruel jest as a trophy of glory.[2b] During the Great Crusade he was a member of the Kyroptera.[3]

By the time of the Horus Heresy, Ophion was a long-serving veteran of some seven decades.[2b] In the aftermath of the disastrous Dark Angels ambush during the Thramas Crusade, he was elevated to the Kyroptera by First Captain Jago Sevatarion. Ophion aided Sevatar with his own forces during the counter-attack against the Dark Angels flagship Invincible Reason, and later used his own ship Shroud of Eventide to hold off the loyalist forces and allow for a Night Lords retreat.[1]

Escaping, he led 9,000 Night Lords to the Nostramo Sector, intending to rallying scattered brothers to his banner.[2b] In 011.M31, an advance squadron of his fleet was attacked over Kalleth by a force calling itself the Ashen Claws. Although the Ashen Claws were forced to retreat, the damage done to the Shroud of Eventide caused it to crash on the planet's surface.[2a] With Ophion lost and presumed dead, the sector fell back into strife.[2b]