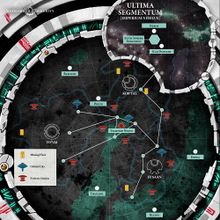 The Nem'yar Atoll is a region of frontier Imperium space that was initially colonised and fortified by the survivors of the T'au Empire's Fourth Sphere of Expansion after their escape from the Warp[1a].

The Fourth Sphere's emergence into realspace created the vortex known as the Startide Nexus, which is a stable dimensional pathway between the Nem'yar Atoll and the T'au Empire. Once the Empire confirmed the survival of the Fourth Sphere, Commander Shadowsun was given command of the Fifth Sphere of Expansion and led it into the Startide Nexus. Once the Fifth Sphere emerged into the Nem'yar Atoll, Shadowsun integrated the survivors of the Fourth Sphere into her command and began expanding the size of the T'au Empire's new domain[1b]. Since its discovery by the T'au, the Nem'yar Atoll has become a cluster of Sept Worlds, stellar fortresses and habitation spheres that surround the Startide Nexus, but is also under almost constant assault from raiders, hostile Xenos and other, darker threats. As such, the military resources allocated to the defense of this key region are considerable.[1a]

The Nem'yar Atoll was later attacked by a sizable Death Guard armada, which were intent on gaining access to the Startide Nexus. Though caught by surprise, Shadowsun quickly rallied her forces against the Chaos invaders and engaged in a desperate battle to prevent the Death Guard from reaching the Nexus and gaining a pathway to the heartlands of the T'au Empire.[1c] The Death Guard eventually were able to enter the Nexus in limited numbers before vanishing or withdrawing. Their plan remains unclear.[4]

Worlds of the Nem'yar Atoll

The precise location of the Nem'yar Atoll is unclear, but statements in Codex: Blood Angels (8th Edition) seem to indicate it being located near the Red Scar, which would place it in northern Ultima Segmentum. This is confirmed in Psychic Awakening: The Greater Good which places the Atoll close to Kar Duniash.[2]