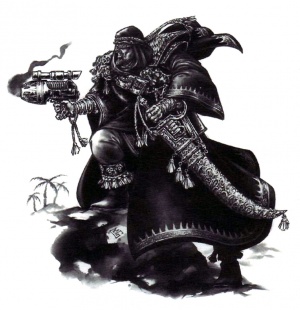 Al'rahem is a name shared by two Captains in the Tallarn Desert Raiders' 3rd Regiment, though the connection between the two figures is not clear.[Needs Citation]

The first Al'rahem was a Captain of the Tallarn 3rd (commonly known as the "Desert Tigers"), which fought in the Macharian Crusade alongside the 4th and 5th Tallarn regiments. During the campaign, the first human planet to be discovered was called Thoth. It had evolved isolated from the Imperium and without the guiding knowledge and light of the Emperor. The majority of the inhabitants had developed dangerous psychic powers and had started worshipping the dark powers of Chaos. As Thoth was a desert world, it was natural that the Desert Tigers should be among the regiments chosen to take part in the invasion.[Needs Citation]

During the landings, Al'rahem's landing craft malfunctioned and crash-landed in the deep deserts. He and his men were rescued by a native tribe of people known as the N'go. Without the N'go, even Al'rahem's knowledge of survival in the desert would have failed him. The N'go were curious about the Imperium in all its aspects, although their language was unintelligible to the troops. A natural linguist, Al'rahem learned their language and much more about the N'go tribes of the deep desert. He learned that the war on Thoth was faring badly for the Imperial forces, and that the "witches" as the tribesmen called the other inhabitants, had called upon daemonic forces to fight the Imperium. The more Al'rahem talked to the tribesmen the more he learned of their own struggle against the people of Thoth and their evil sorcery.[Needs Citation]

Under Al'rahem and his remaining band of Desert Tigers, the N'go fought a hit-and-run war against the Thoth, appearing suddenly from the deep desert to loot and destroy before returning to their secret bases. After the war was finally won, Al'rahem returned to his regiment. His fame had spread far and wide throughout the army as had the stories of the heroic N'go tribes. After the armies passed on, the Inquisition declared the world Amundi Heretica. The N'go were evacuated along with genetic samples of most of the plants and animals whilst the world was cleansed with virus bombs. Later, the desert tribes were returned after swearing oaths of loyalty to the Emperor, and to this day Thoth is ruled by the Lords Al'rahem, the descendants of Al'rahem.[1] 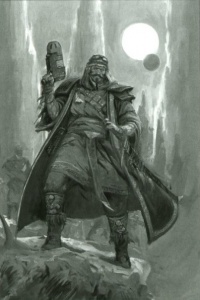 Captain Al'rahem is a company commander in the Tallarn 3rd 'Desert Tigers', but he delegates most of the logistical responsibilities to a a subordinate, preferring to lead his men in combat personally.[2a]

Al'rahem excels at tactical command, possessing a coolness under the pressures of combat that is the envy of many general officers. His tactics are based on cunning and patience, using careful reconnaissance to probe his enemy for weaknesses, and then striking at them suddenly before disappearing. His natural leadership, gifts as a linguist, when combined with his charm and quick intellect, earned him the respect of not only the men under his command, but those of any Guard regiment allied with the Desert Tigers, including the famously xenophobic Catachans.[2a]

During the Battle for the Ruins of Esko's Moon, Al'rahem and his forces faced off against the Eldar who were using similar hit and run tactics. Al'rahem, however, won over the Eldar by creating an exacting crossfire with a platoon of his men after trekking halfway across the moon to the ruins and striking through the lightly defended southern pass in, which the Eldar had believed was impassable. Al'rahem claimed the head of the Eldar Autarch Kaliell, breaking the deadlock between the two sides.[2a]

In combat Al'rahem carries a Plasma pistol and the Claw of the Desert Tigers, a master crafted power sword.[2a]

The relationship between the two Al'rahems is unclear. One legend states that the latter Al'rahem is named after the first, others that he is the earlier Al'rahem's descendant. Some even claim that they are one and the same, which is not impossible when warp storms and dimensional cascades can distort the normal passage of time.[2a] 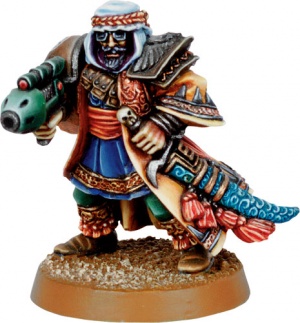