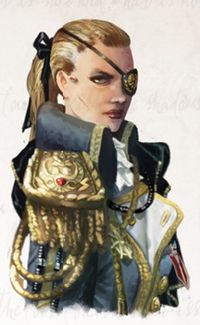 Anastasia Arkelius is a Lord Admiral of the Imperial Navy.[1]

The younger sibling of General Derian Arkelius, Anastasia Arkelius has enjoyed a more successful career than her older brother, having reached the higher ranks of the Admiralty while still only in her first century. At the beginning of the Achilus Crusade, she served as a Rear Admiral, newly promoted, overseeing the movement of vessels through the Jericho-Maw Warp Gate and liaising with the Battlefleet Calixis Admiralty to maintain supply lines. After Lord Militant Achilus’ death, Arkelius found herself elevated to Admiral, as Lord Militant Tetrarchus began to rearrange the Crusade’s command staff. Placed in command of the six Navy battlegroups of the Orpheus Salient—Icarus, Argo, Cerberus, Daedalus, Vishnu and Santos—she was shortly thereafter elevated to Lord Admiral and commander of all Imperial Navy forces within the Salient.[1]

Being a fine tactician and a responsible commander, Arkelius understands the weight of command well, and the burdens of the Admiralty are great indeed, with the lives of hundreds of millions of souls on thousands of ancient, venerated and often irreplaceable starships, within her hands. She has earned the utmost respect from the crew of her flagship, the Emperor’s Nobility, and by the Admirals, Commodores and Captains of her fleet.[1]

Arkelius’ flag can be found within Battlegroup Cerberus at present, as it has been since just before General Mikal Curas died. It operates close to the Iron Collar, and part of the group was anchored above Hethgard until the Tyranids reached the fortress world. From the battlegroup, Arkelius commands the other four remaining battlegroups (Battlegroup Argo having been lost with General Curas) as best she can, given the difficulties of communicating through the Shadow in the Warp and the scattered nature of those battlegroups due to withdrawals and defeats.[1]

When General Curas was lost, and Lord Commissar Theren wrought his deception, Lord Admiral Arkelius was the first to be informed and brought into what would become the Triumvirate. To this day, she uses that, and the swiftness of her ascendance to one of the highest ranks in the Imperial Navy, to taunt and bait her elder brother into some rash course of action, maintaining a rivalry that has existed between them since they were children. That she is still willing to antagonize her brother, who is the most powerful Imperial Guard commander in the Salient and extremely valuable to the continued conflict there, demonstrates perhaps her greatest flaw in judgement, placing a long-standing family feud and her own pride above the defence of the Salient’s remaining worlds. Without Lord Commissar Vance Theren to mediate disputes between the two, the Orpheus Salient might have collapsed entirely years ago.[1]

As is common amongst the officers of the Imperial Navy, Arkelius regards the Space Marines with a mixture of caution and respect. Few officers in the Navy feel comfortable with the Space Marines maintaining their own fleets, and an uncertain peace exists between the Navy and many Space Marine Chapters over the matter of war-fleets. However, Arkelius respects the Space Marines’ prowess and effectiveness, though she is cautious of their ulterior motives. With the Deathwatch, the same is true, though to a greater extent, and she is far from appreciative when her vessels are commandeered for clandestine missions.[1]