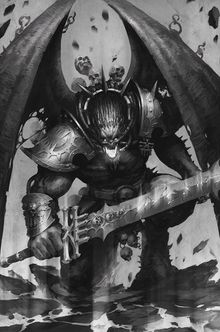 Angron with the Black Blade[3]

The Black Blade was an enormous and powerful Daemon Sword wielded by the Primarch Angron after his ascension to Daemon Prince.

The weapon was forged by the Dark Mechanicum shortly after Angron's ascension in the Shadow Crusade.[2] Wielded by Angron in the First War for Armageddon, the weapon was powerful enough to instantly annihilate five Grey Knights Terminators in a single stroke. However the Black Blade was stopped in mid-swing by the psychic might of the young Grey Knights recruit Hyperion. Hyperion managed to first snap, then finally shatter the blade by exerting an enormous amount of psychic force that nearly killed the Grey Knight.[1]