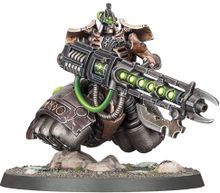 The Destroyer Cult is a sub-sect of Necron society.[1a]

Those of the Destroyer Cult are Necrons who have descended into apparent madness and are considered untrustworthy and dangerous by their own kind[1a]. They are agents of annihilation whose sole reason for existence is centered around an unshakable yearning to cleanse the universe of life. Unlike most other Necrons, those of the Destroyer Cult do not wish to reverse biotransference and regain their organic forms; instead they have heavily modified themselves to better kill their foes. Members of the Destroyer Cult can be found on every tomb world and have been seen among every social class in Necron society. What impels them to join the Cult is unknown, but some suspect a subconscious imperative programmed into their command protocols - possibly by the C'tan.[1b] Destroyer Cultists are outcasts in their own society, with most Necrons believing their madness to be infectious. However, Dynasties still find them useful shock troops.[6]

Such is their hatred of life that members of the Destroyer Cult hold that they will relentlessly scour a planet's organisms down to the microscopic level. These include plants and bacteria and even oceans, which they will boil with their weaponry. Even if it takes decades, Destroyers will never cease in their purge.[5]