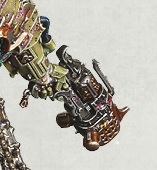 The Lantern was the name of an energy pistol used by the Death Guard Primarch Mortarion during the Great Crusade and Horus Heresy[1]. Even after ascending to Daemonhood, Mortarion still wielded the Lantern and continues to do so ten millennia later in the Thirteenth Black Crusade.[2]

The Lantern is a brass-coloured pistol. Dating back to the Age of Strife, the pistol was forged by the leader of a cult on Shenlong which worshiped a dragon god. Later during the Great Crusade the Emperor himself led an invasion of Shenlong, slaying the Lantern's maker and taking the weapon into his personal armory. When Mortarion was discovered and brought aboard the Emperor's personal Battle Barge Bucephelus, he saw the pistol in its armory and took it as a gift from his father.[4]

The Lantern was capable of firing powerful energy blasts that disintegrated living beings. Rather then sully his Manreaper with the blood of the Jorgall Xenos, Mortation instead made extensive use of the Lantern to kill his enemies on their world cylinder ship.[3b]