The Flight of the Eisenstein (Novel) 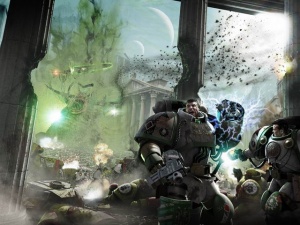 The Flight of the Eisenstein is a novel by James Swallow and the fourth book in The Horus Heresy series.

The novel was first published in 2007 and has a green spine-band, the first in the series to do so. This particular instalment follows the flight of Nathaniel Garro, a Captain in the Death Guard Legion from the betrayal of the Isstvan III Virus-Bombing in an attempt to bring warning of Horus's treachery to the Emperor.

At the 2012 Black Library Weekender, C.Z. Dunn announced that The Flight of the Eisenstein would be the next Horus Heresy volume to be released, after A Thousand Sons and Prospero Burns, as a full-length audio book on CD. It was also the next volume to be released in hardcover, after Horus Rising, False Gods, Galaxy in Flames and Angel Exterminatus. It was later included in "The Novels: Volume 1" e-book collection.

Having witnessed the terrible massacre of Imperial forces on Isstvan III, Death Guard Captain Garro seizes a ship and sets a course for Terra to warn the Emperor of Horus's treachery. But when the fleeing Eisenstein is damaged by enemy fire, it becomes stranded in the warp — the realm of the Dark Powers. Can Garro and his men survive the depredations of Chaos and get his warning to the Emperor before Horus's plans reach fruition?

During the secret build-up to the Horus Heresy, the Death Guard Legion battle the alien Jorgall in their bottle-ships. Battle-Captain Nathaniel Garro of the 7th Great Company leads part of the assault and the Death Guard are victorious. Following the battle the Legion travel to the Isstvan system, ostensibly to crush a rebellion by the people of Isstvan III. In a preliminary battle to take an outer facility held by the rebels the Death Guard and Emperor's Children encounter a Warsinger, one of the rebel leaders who can create sonic force and inspire their followers through their singing. Battling the Warsinger Garro is wounded and suffers severe damage to his torso and one of his legs. Lord Commander Eidolon uses an illegal alien organ grafted to his throat by Fabius Bile to kill the Warsinger with a sonic scream. Recovering in-fleet, Garro becomes a problem for the traitors about to begin the Horus Heresy as he is deemed too loyal to the Emperor to rebel against him but cannot be sent to the surface of Isstvan III to fight the rebels and be killed in the Virus-Bombing like the rest because he is injured. As a solution he is given joint command of the frigate Eisenstein with fellow Death Guard Captain Ignatius Grulgor, the latter being under orders to kill him and his men. Before Grulgor and his men can make their move Garro is contacted by Saul Tarvitz, an Emperor's Children Captain he had formed a friendship with during a previous conquest. Tarvitz tells Garro of the imminent Virus Bombing and after commanding the Eisenstein to fire on the traitors pursuing Tarvitz to the surface he moves to deal with Grulgor and his men. A fierce skirmish follows and ends when Grulgor and his men are ejected into the void. Garro prepares to jump the Eisenstein to the Warp to bring warning of Horus's treachery to Terra. While the preparations are being made a Thunderhawk carrying Kyril Sindermann, Euphrati Keeler, Mersadie Oliton and Iacton Qruze makes contact and after confirming that they are fellow loyalists Garro allows them on board. The Eisenstein prepares to jump to the Warp but this is noticed by the Terminus Est, ship of Death Guard First Captain Calas Typhon who is one of the traitor leaders. The Eisenstein makes it into the Warp but not before being damaged by the Terminus Est's guns.

In the Warp the ship's Geller engines fail, allowing a horde of undead rotting Plague Marines aboard. Garro and his crew fight back and are horrified when they realize that their enemies are none other than Grulgor and his men, reincarnated by the plague-god Nurgle. They succeed in defeating the Plague Marines but one of Garro's squad, Solun Decius, receives a poisoned wound from their weapons. The Eisenstein becomes stranded in the Warp until it is rescued by Rogal Dorn and the Imperial Fists. Taken to Terra to account for themselves, Garro and his men convince Dorn of Horus's betrayal helped by Euphrati Keeler and are placed in holding cells of Terra's moon Luna, in the stronghold of the Sisters of Silence. There Solun Decius gives in to the poison in his body and is transformed into The Lord of the Flies and rampages through the fortress, fighting Garro's men and Sisters of Silence alike until Garro finally kills him in the desert of Luna's surface.

Brought before Malcador the Sigillite Garro, Iacton Qruze and a Sister of Silence commander are given a speech implying that they become the first of the Inquisition.