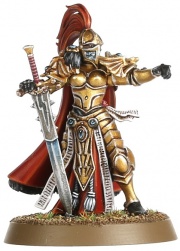 Oblivion Knights are the members of the Chamber of Oblivion, a martial elite sub-sect of the Silent Sisterhood. Recruits are selected both for their record as warriors and their blank ability.[1]

Oblivion Knights are usually only deployed on a large-scale in order to combat the threat of Alpha-Level Psykers, putting down psyker-instigated uprisings, and population purges. These roles combined with the sinister aura given off by these pariahs makes them an object of dread and fear among the greater Imperium.[1]

Oblivion Knights may be deployed either as full cadres led by Mistresses,[1] or individually as commanders for other cadres.[2] An elite cadre of Oblivion Knights known as the Raptor Guard form the honour guard of Knight-Commander Jenetia Krole.[1]

Oblivion Knights-Centura serve as the primary battlefield commanders of the Silent Sisterhood. They are chosen from the ranks of the Oblivion Knights for their seniority, martial skill, and power as psychic nulls.[1]