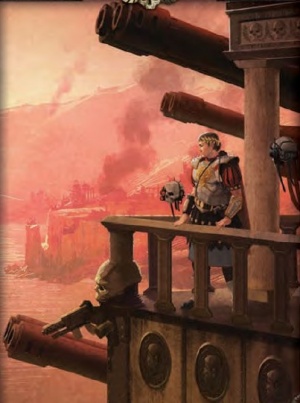 Severus XIII is the current ruling member of House Severus, a once-powerful aristocratic house in the Calixis Sector. Continuing the tradition began by his ancestor Severus I in M39, Severus XIII maintains a bitterness against the Imperium for denying his family control over the Periphery Sub-Sector and lusts for power. He would go on to covertly use the Dark Eldar Kabal known as the Children of Thorns to gain control of much of the Sub-Sector, ruling it as his private fiefdom. However after the invasion by the Ork Warboss Ghenghiz Grimtoof, his Dark Eldar allies abandoned him and Severus was forced to plea to the Imperium for aid. What began was a collection of campaigns known as the Spinward Front, which dramatically escalated when Severus XIII annexed the worlds he ruled as his personal fiefdom known as the Severan Dominate. Since then, Severus XIII has been declared to be a traitor to the Imperium by Sector authorities.[1]