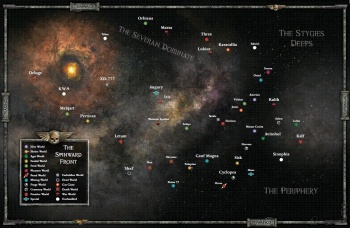 The Spinward Front is a region of the Calixis Sector that is consumed by conflict. The term is also used to refer to the many Imperial war efforts there to bring the region under control.[1]

In mid M39, much of the Calyx Expanse had been liberated by the Imperium from Xenos control. Many Rogue Trader houses arose to fill the void, hoping to rule these newly liberated worlds. The most successful of these Rogue Traders was Duke Severus I, who battled many foul Xenos, discovered vital Warp routes, and battled a gigantic Warp beast. He went on to forge a stable and prosperous Imperial rule over the Periphery Sub-sector. However it soon became apparent that there was more to Severus than meets the eye, and he used his prestige and wealth to establish a private empire within the Calyx Expanse. In the end however, Severus' deeds and popularity was outdone by the Imperial Guard Lord General Militant Drusus, who soon became the dominant player in the Expanse at the expense of House Severus. Embittered, the Severus family would carry a grudge against the Imperium for centuries to come.[1]

In 779.M41, the latest ruler of House Severus, Severus XIII, began to plot ways to increase his own power. Looking to the Periphery Sub-Sector once more, Severus allied with the Dark Eldar warband known as the Children of Thorns. Providing the Dark Eldar human slaves in return for their aid, Severus was able to use the cruel xenos to conquer the weak Planetary Governors of the Periphery Sub-Sector and establish the private empire his ancestors had worked to achieve for generations. To try and keep his activities from attracting Imperial retribution, Severus avoided declaring formal secession and tried to keep his ties to the Dark Eldar as secretive as possible.[1]

However it was not the Imperium, but rather Orks that posed the first major challenge to Severus' rule over the Periphery Sub-Sector. A large Waaagh! under Ghenghiz Grimtoof crashed into the Sub-Sector, burning worlds and overrunning Severus' weak PDF armies in short order. With his Dark Eldar allies having since abandoned him, Severus turned to Imperial aid to stem the Green tide. After heated and desperate negotiations with the Sector Lord Marius Hax, the Imperium decided that it was in their interest to halt the Ork Waaagh! before it grew into a serious threat. However Imperial forces mobilized by Hax consisted mainly of local troops drawn from the Calixis Sector and they proved unable to decisively turn the tide against the Orks, though they did relive the world of Kulth from Greenskin siege.[1]

But while Kulth was relieved, many other worlds such as Deluge, Pertinax, and KW-9 fell to Greenskin invasion. Worse still, the Dark Eldar Children of Thorns began to take advantage of the total collapse of human authority in the region to increase their raids, while the forces of Chaos under Sektoth appeared amidst the anarchy to launch a series of brutal raids. Beset upon by all sides, Severus XIII announced that he was personally annexing the Sub-Sector into what became known as the Severan Dominate. Furious, Sector Lord Hax declared Severus a secessionist and moved against him as well as the heretic and xenos forces already plaguing the region. Meanwhile, the Ork forces have since entered a second phase of their campaign and have enslaved multiple worlds to produce weapons, such as Avitohol.