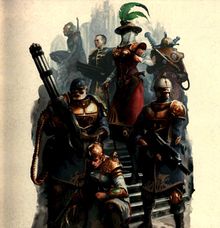 The Elucidian Starstriders were contacted by Lord Commander Guilliman sometime after the Great Rift's creation and tasked with finding new uncorrupted worlds for the Imperium to colonize. After asking how much she would be paid for her service, Vhane agreed and used her fleet of ships to begin searching for these new worlds. She eventually discovered the world of Arcadia Nihilus and brought forth the first wave of colonisits to populate the world. However, while returning with more colonists, the Geller field of Vhane's flagship, the New Dawn, failed and when her fleet emerged near Arcadia Nihilus, she discovered the taint of Nurgle had infected her ship. The New Dawn began to show signs of corruption, as parts of the ship turned into flesh, but worse still a large part of Vhane's crew on the New Dawn became corrupted as well.

These corrupted crew members then began attacking the New Dawn's few uncorrupted survivors and as her beloved ship fell to mayhem, Vhane led a small group of her followers in starting the New Dawn's self-destruction sequence. Once it began, Vhane and the few other survivors left, escaping to Arcadia Nihilus aboard Drop pods before the New Dawn exploded. They did not find a safe refuge, however, as Vhane and the others soon discovered that Arcadia Nihilus had also felt the touch of Nurgle, and was now filled with disease, corrupted colonists, Daemons and the living undead.