Necromunda: Hive War is a 2021 starter set for the tabletop game Necromunda.[1]

The new Necromunda: Hive War boxed set is the perfect way to get started with Necromunda – the fast-paced, violent game of gang warfare set in the grim darkness of the far future. Join us as we lift the lid and explore the incredible contents that will have you fighting to control your own corner of the underhive in next to no time.[2] 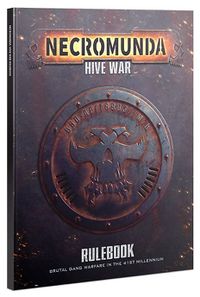 The rulebook found in Necromunda: Hive War is unique to this boxed set. This book has been specially created to make playing the game easier than ever, and it includes all of the tweaks and improvements from all of the errata released since Necromunda came out.[2]

Along with the rules, the book includes six scenarios to help you learn the game, building your confidence until you’re an underhive expert. There are also basic rules for all six of the Clan Houses and their unique weapon lists.[2]

20 plastic miniatures, each supplied with a Citadel 25mm Round Necromunda Base: 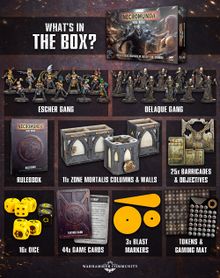