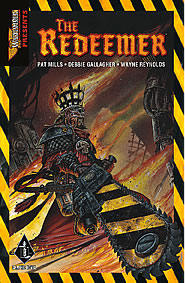 The Redeemer is a graphic novel written by Pat Mills and Debbie Gallagher and drawn by Wayne Reynolds.

Set on the Hive World of Necromunda, The Redeemer chronicles the battles of a small band of Redemptionists, fanatical and homicidal cultists of the Emperor, led by their supreme leader and arch-maniac, Klovis the Redeemer, as they fight to stop The Caller, a deadly and extremely powerful Ratskin Shaman, who is leading a horde of Ratskins, Scavvies, Plague Zombies and other Underhive scum in a revolution against the nobles of the Spire.

The first issue (Epistle) opens with the Redeemer and his maniacs purging a group of Ratskins for a crime Deacon Malakev (the narrator and one of Klovis's acolytes) cannot even say (they tried to run away). As Klovis tells one Ratskin that he should be thanking him for rewarding him with a martyr's crown, the Ratskin tells Klovis that is sick in the head and calls to the Hive Spirits asking for vengeance for the deaths of his people. At this the Caller, the self-proclaimed Shaman of Shamans, bursts from the ground riding a giant Millasaur. He attacks the Redemptionists, proclaiming his intention to lead a revolution of Ratskins to vengeance against the Hivers. Klovis drives him off with a blast of fire from his crown, but the Caller later attacks the Redeemer at his own camp. After fighting him off, and discoving that the Bloodmare Stone (An eye from one of the- if not the- last of the Giant Necromunda Spiders) is the source of his great power, Klovis and his band set out deeper into the Underhive to purge the Caller. The remainder of this issue deals with the Redeemer slaying a mutant gang boss in a duel so that he and his men can head further down.

In the second issue, the Caller gathers his armies and the Redeemer is captured by a psyker called Ferron Voor, the Emissary of Karloth Valois; Master of Plague Zombies, who drains the life from several of his men to reanimate a monstrous mutant rat, with which he tries to kill Klovis (only to die in the process).

In the third issue, Klovis and the Caller's armies finally battle with each other, the Slaught-drugged Redemptionists wreaking great havoc whilst Klovis manages, in a superhuman effort, to destroy the Rat God (from the last issue), the Bloodmare Spider Queen and the Caller, despite being badly wounded in the process. The power leaking from the crumbling Bloodmare Stone turns his zealots against him, leading to Klovis scourging his own men. In the end, only one survives: Malakev, who is shown on the second last page of the issue to have been converted into a Scribe-Servitor, a mindless cyborg slave who will spend the rest of his existence writing down Klovis' deeds.

After a "coming soon" preview in the First Birthday Special Issue (March 1999), The Redeemer first appeared as a pilot strip in Warhammer Monthly 16 (June 1999) detailing his adventures in the ash wastes.

For the next three months, a "Redeemer Special" was printed alongside the normal issue of Warhammer Monthly, containing four chapters per "Epistle" (as these special issues were called). As usual for Warhammer Monthly, the comic was entirely black and white except for the cover.

These chapters, still in black and white, were collected into the initial production run of The Redeemer graphic novel in April 2000.

The main story strips were then coloured by Len O'Grady and edited by Marc Gascoigne and Andy Jones into a re-released series of four individual comics entitled "The Redeemer". Each contained three of the twelve chapters, and they were released monthly from June to September 2002.

Finally, these coloured strips were collected together with "Blood & Circuses" into a second – Full Colour Edition – graphic novel in December 2002.

This makes a total of 10 individual Redeemer publications, all of which are now out of print.