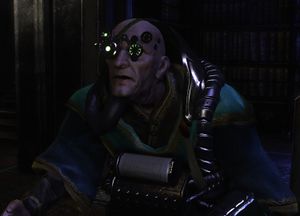 Aemos was a savant, His role to provide Eisenhorn with useful information and complex computation. Aemos's considerable knowledge was derived from a Meme-Virus that he caught at age forty two. As a result, Aemos became a data addict, compelled to absorb any and all information, no matter how trivial and apparently unimportant. His augmented mind was then able to sift patterns and generate correlations from these masses of information with astonishing speed and accuracy. Aemos had a photographic memory and could remember anything that he has seen no matter how small. Aemos also has a latent talent for acting, and holds possession of several forged identities. One of his known identities is Doctor Savine from the Mendalin Royal Scholam Geologicus.

Aemos was already old by the time he entered Eisenhorn's service. His body had several augmetic implants and prostheses. He was easily distinguished by his oversized augmetic eyewear and bald pate. On the rare occasion that something vexes him, he is keen to utter his trademark phrase, "most perturbatory". 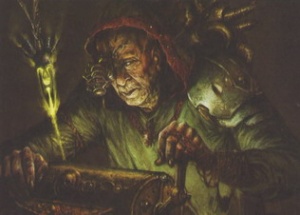 Aemos died performing his greatest work for Eisenhorn: decrypting the mysterious writings found on the planet Promody concerning the history of Ghül. Unable to make anything out of the glyphs, he borrowed Eisenhorn's cursed book, the Malus Codicium. The bound daemonhost Cherubael was able to commune with him through the book, and offered him the information in exchange for him arranging its release. Eisenhorn discovered the insidious plot, but the rogue trader ship he was traveling on (the Essene) was boarded shortly after by Inquisitor Heldane and Grandmaster Osma, who sought to apprehend him. Aemos managed to elude the Inquisitors long enough to summon Cherubael into one of the Essene's astropaths using his memorized knowledge of the Malus Codicium, who went on a wild rampage, causing major damage to the ship. Aemos eventually dispossessed Cherubael and took it inside his body until the wounded Eisenhorn could fashion a proper host (the dead body of Godwyn Fischig) for the daemon. The strain was too much, and he died aboard the shuttle fleeing the exploding Essene, his last words being most pertubatory.