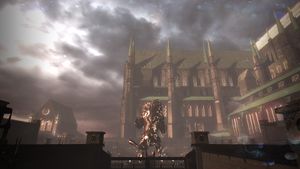 House Glaw was a powerful noble family on the planet Gudrun, in the Helican Subsector of Segmentum Obscurus. They often conducted business with the Regal Bonded Merchant Guild of Sinesias, a prominent trading cartel in the subsector.[1]

In the early years of the 41st millennium, Pontius Glaw, the seventh son of house patriarch Oberon Glaw, was corrupted by Chaos and led a cabal of like-minded Slaaneshi cultists that eventually earned them the attention of the Inquisition. Inquisitor Absolom Angevin and his retinue, including future Inquisitor Commodus Voke, tracked down Pontius and his cabal, and House Glaw - seeking to distance themselves from their heretic kinsman - aided the Inquisition in its hunt, which ended with the death of Pontius.[1]

House Glaw did not escape suspicion afterwards, however. Two centuries later, in 240.M41, investigations by both Voke and his colleague Inquisitor Gregor Eisenhorn into activity in the subsector eventually led to Gudrun and House Glaw. For Voke, it was the burning of several heretical cults; for Eisenhorn, it was the pursuit of the recidivist Murdin Eyclone and the discovery of an artifact known as "the Pontius". By the time they pooled resources, Voke had already visited the Glaws several times and they cooperated with his investigations, but he had found nothing, likely because the Glaws knew they were dealing with the Inquisition. Eisenhorn, in the guise of a wealthy grain merchant named Farchaval, was due to meet with the Glaws for trade negotiations, having arranged a meeting with them through Guild Sinesias. Eisenhorn eventually discovered that the entirety of House Glaw was corrupt; the new Lord Oberon and his brother Urisel were involved with powerful Chaos agents, including the Emperor's Children Chaos Space Marines, to obtain a powerful tome of Chaos lore known as the Necroteuch from the Chaos-warped saruthi. "The Pontius", as it turned out, was a crystal containing the living essence of Pontius Glaw, and his family were attempting to resurrect him.[1]

After Eisenhorn was captured by the Glaws and their agents, his pilot Midas Betancore - who had managed to escape capture when the Glaw militia raided Eisenhorn's quarters - sent word to Inquisitor Voke. That was all the excuse the puritanical inquisitor needed to conduct a purge, and he called on the Imperial Guard and Navy. House Glaw was all but wiped out, their estate left in ruins.[1]

Lord Oberon managed to escape to KCX-1288, a saruthi planet where the trade for the Necroteuch was to take place, with the aid of the renegade Captain Estrum and his small fleet; he was killed during the battle between Glaw forces and the Imperial Guardsmen on Estrum's ships who had remained loyal to the Emperor. Pontius himself, kept imprisoned by Eisenhorn until over a century later, would meet his final end at Eisenhorn's hands in 386.M41, forever ending the threat of House Glaw.[1][2]

Alace Glaw may be the last of the family. She lived in the city of Queen Maab on the Planet Sancour around 450-480.M41. Currently, she fled into the City of Dust after a fierce discussion with Teke, "the Smiling One", where she is currently thought to be lost..[3]