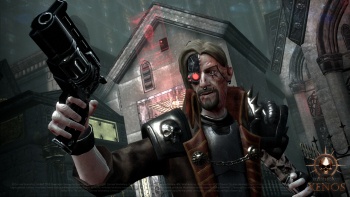 Murdin Eyclone was a servant of Chaos, who had operated in and around the Helican Subsector. Described as a "facilitator", Eyclone hired out his services to any Chaos cult who needed him.[1a]

Eyclone was a psyker, whose powers allowed him to control others, and to wipe memories. At some point, he encountered Inquisitor Gregor Eisenhorn, who hunted him for six years, until finally confronting him on Hubris, where he attempted to murder the entire population of the planet who were cryogenically frozen, a ritual intended to empower Pontius Glaw[1b]. The scheme was abandoned at the last minute, which coincided with Eisenhorn's arrival. Despite the loss of his companion, and the death of those around him (roused from sleep too early by Eyclone), Eisenhorn cornered Eyclone on the roof, and, having ensured Midas Betancore had dealt with his men, killed him[1c]. Eyclone's gifted defence mechanism, that of an extending metallic worm hidden under his fingernail, was destroyed by Eisenhorn, Uber Aemos and Godwyn Fischig.[1a]