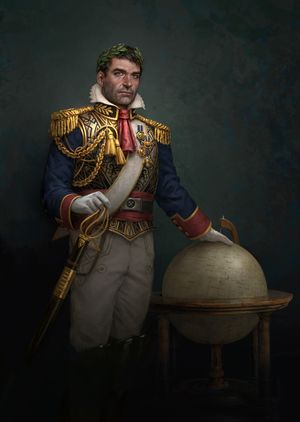 Macaroth was a high-ranking general of the Imperial Guard who became the Warmaster of the Sabbat Worlds Crusade after the death of his predecessor, Slaydo.[2]

Young, and relatively undistinguished compared to the other senior commanders of the Crusade, Macaroth came to Slaydo's notice during the Battle for Balhaut, assuming command of the force on the Balopolis front after all three of his immediate superiors were killed or incapacitated in as many days. Slaydo granted him a battlefield promotion to Marshal, and Macaroth took control of the entire front, turning what was seen as an impending Imperial defeat into a great victory.[1a]

Before Balhaut, Macaroth appears only once in the Crusade's annals; during the initial Imperial invasion of the Sabbat Worlds, Slaydo became frustrated with the slow progress of the invasion of Formal Prime, and the heavy casualties being inflicted on his men. He exclaimed, "show me men who know how to fight!" and one of his subordinates retorted, "follow me to the morgue, sir, and I'll show you plenty." This remark was always attributed to Lord General Curell, but on his deathbed, Curell swore it had been his deputy, Macaroth.[1b]

During the battle for the Oligarchy High Palace on Balhaut, Slaydo was killed in single combat with Archon Nadzybar.[Needs Citation] On his deathbed, Slaydo declared Macaroth his successor as Warmaster of the Crusade.[2] This decision upset many of his Lords Militant, who regarded Macaroth as too young and too junior an officer to ascend to the position. A period of political in-fighting amongst the highest echelons of the Imperial Crusade force would take place over much of the next year. That Macaroth survived it and retained his position is a tribute to the rank-and-file of the Guard's great affection for and faith in Slaydo, but also Macaroth's surprising ability as a leader.[1c]

Immediately after the Imperial victory on Balhaut, Macaroth launched a further advance into the Cabal Worlds, determined to keep up the momentum of the Crusade that Slaydo began. He gained a reputation as a gambler which worried many of his subordinates, but many of his gambits turned out successfully. Like many leading commanders, Macaroth was a somewhat inscrutable figure, and his actions were the source of heated debate among Imperial Tacticians and historians alike, but what they saw as recklessness may simply have indicated Macaroth's talent for strategy and out-thinking his opponents, which Slaydo recognised.[1d]

Warmaster Macaroth led Imperial forces to many great victories, most notably at the fortress-world Morlond. The Crusade under his command also succeeded in the capture and/or destruction of many of the Magisters who escaped Balhaut after Nadzybar's defeat, including Sholen Skara and Heritor Asphodel.[1e]

However, the Crusade was stalled by the rise of Urlock Gaur, a brutal Chaos warlord in command of a disciplined army, the Blood Pact. Macaroth also knew he could not afford to underestimate the abilities of Anakwanar Sek, the most brilliant of Nadzybar's former lieutenants, who continued to plague the Crusade in the years after Balhaut.[1f]